Dr. Cassandra Spellcraft (Ida Lupino) was a villainess in the 1968 episode (S3E25) "The Entrancing Dr. Cassandra" for the TV action comedy series "Batman".

Dr. Cassandra Spellcraft was a world famous alchemist and science practitioner who had been given an ancient alchemy that was passed on from her fore-mothers who always failed what they started. She constantly states that she will not fail like they did. Her great grandmother learned how to transmute basemetals into gold, but failed to include certain ingredients resulting in homemade TNT that blew her up (they found pieces of her as far as Londinium). Her grandmother made a universal solvent and fell into it killing her (they buried her in a thimble). Her mother built a pepetual motion machine, but tripped and stumbled into it slicing herself to pieces.

Cassandra made her debut at the Gotham City Alchemical Bank and Trust Company, where she and her husband Cabala (Howard Duff) swallow her mysterious camouflage pills, which turn them invisible. They make their way through the crowd, defeat the security guards and bank teller, then loot some cash.

Police Commissioner James Gordon (Neil Hamilton) and Chief Clancy O'Hara (Stafford Repp) are informed of the robbery but as they attempt to contact Batman (Adam West) and Robin (Burt Ward), Dr. Cassandra and Cabala (whom are still invisible) attack the two men. Cassandra contacts Batman and tells him that she will put Gotham in a hypnotic trance, and there is nothing he can do to stop them. Batman and Robin hurry to Police Headquarters and find out that the crooks have already committed crimes three times in the past six hours. Batman is determined to find out how this happening.

Cassandra and Cabala return to their hideout in the basement of the Mortal and Pesel building on Abracadbra Alley, where they take their anti-antidote pills turning them visible again. They had already stolen $600,000 in cash, but the greedy Dr. Cassandra wants more. She also wishes to embark on her most ambitious scheme yet: To free Gotham City's costumed criminals from prison, give them her camouflage pills, and rule an invisible gang of Batman's greatest enemies. She then shows Cabala her latest invention: The Alvino-ray gun, which she plans to use on the Terrific Trio.

Commissioner Gordon receives a call from her saying that she will steal the famous Mope Diamond from Spiffany's jewellery store at precisely two o'clock. Batman is informed and the Caped Crusaders set off straight away. Joined with Batgirl (Yvonne Craig), they find Dr. Cassandra and Cabala at the jewellery store, trying to steal the diamond. She fires her ray gun at them, taking away their 3-Dimensional forms and making them as flat as cardboard picture boards. With the Terrific Trio immobilized. Cassandra and Cabala then steal the diamond and make their escape.

As the final insult, they later slide the flattened Caped Crusaders under the doors of Police Headquarters, where Commissoner Gordon and Chief O'Hara find them. After finding no way of restoring them, they use the Batphone to contact Alfred Pennyworth (Alan Napier) and ask him to help them.

Back at her hideout, Dr. Cassandra takes six camouflage pills and goes on with her plan to free six of Gotham City's worst villains and public enemies. Alfred Pennyworth, dressed in a disguise, picks up the flattened trio of Batman, Robin, and Batgirl at Gotham Post Office and takes them back to the Batcave.

At the state penitentiary, Dr. Cassandra and Cabala (after taking more camouflage pills) break into Warden Crichton's office and threaten him and the guard with him with the Alvino-ray Gun. Dr. Cassandra then makes an announcement on the PA system stating that she is going to release the arch-criminals of Gotham City. Dr. Cassandra also apologizes to the rest of the inmates that she can't do the same for the rest of them as "too many villains spoil the broth." Following a countdown sequence, Dr. Cassandra hits a button which frees Joker, Penguin, Riddler, Catwoman, King Tut, and Egghead (all six were actually portrayed by look-a-likes due to either their original actors not being available or it being too expensive for them to appear as their characters) and instructs them to meet her at the prison gates.

In the Batcave, Alfred puts the Terrific Trio into the Three Dimensional Bat-Restorer and departs, so Batgirl won't recognize him as Bruce Wayne's butler. After they get their 3D forms back, Commissioner Gordon phones them saying that Dr. Cassandra has just freed six of Gotham's most dangerous arch-criminals. Batman, Robin, and Batgirl use the Batcomputer to find out the most probable locations where Cassandra and the villains could be hiding, before setting off.

At her hideout, Dr. Cassandra holds a meeting with the six costumed villains, giving them camouflage pills and a specific place of Gotham to rob. Dr. Cassandra instructs Catwoman to rob the fish market areas, instructs Egghead to rob the poultry farms, instructs Penguin to rob the ponds and parks, instructs King Tut to rob the museums, and instructs Joker and Riddler to rob all the amusement parks. She and Cabala tell them that they get fifty percent of everything they steal, but in return will keep on giving pills to help in their crimes.

The Caped Crusaders then crash the hideout, and all the crooks in the room swallow the camouflage pills, making the trio unable to see them. Batman, Robin, and Batgirl try to resist but the villains turn the tide against them. The Terrific Trio decide to destroy the lights, so that the criminals won't be able to see them either. After a wild brawl in the dark, the heroes emerge victorious. Knocked unconscious, the supervillains re-materialize. Dr. Cassandra tries to destroy the trio with her Alvino-ray gun, but Batman tells her that he has installed an Alvino-ray Bat Disintergrator in his Utility belt so she can't do it again. She and Cabala are arrested and taken off to prison with the rest of the criminals. 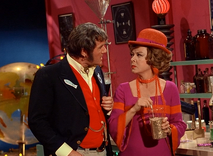 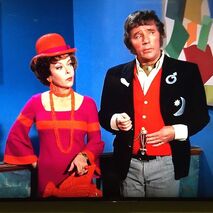 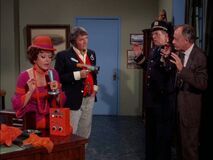 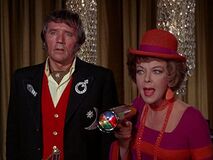 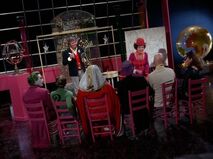 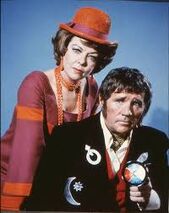 Add a photo to this gallery
Retrieved from "https://femalevillains.fandom.com/wiki/Dr._Cassandra_Spellcraft_(Batman)?oldid=184425"
Community content is available under CC-BY-SA unless otherwise noted.