Dr. Avril Carter is a psychiatrist looking to gain massive fame for giving miraculous cures to her patients. She does this with a cursed antique radio, which delivers news of her cures while also reporting on disasters regarding other Galler' worst fears, all despite the fact that the radio is not wired to anything. The curse includes Dr. Carter placing the radio inside the rooms of patients under the care of Dr. Kevin Hines. In the opening scenes of the episode, the radio reports on a fire in the facility, resulting in a female patient with a fear of fires being literally scared to death. Another victim was taken by the curse when the radio reported on snakes being loose in the building; a patient who was afraid of snakes jumped to his death.

Carter is later instructed by the radio that she must cause two more accidental deaths by 11:55PM in order to receive a miracle cure for serial rapist John Gibson, which would get her the Nobel Peace Prize. Once Hines (who was visited by Ryan and Micki earlier regarding the radio) becomes suspicious of Carter's villainous methods, the evil doctor knocked out Hines with a lamp, and then sent him into the room of a psychotic patient, who later killed him. Needing only one more death and with time running out, Carter enlisted Gibson to attack Micki and abduct Ryan, with the plan being to kill Ryan with electrocution, coming shortly after Ryan was electrocuted by the fence earlier. Carter's evil plan is thwarted when Micki assaults Gibson and shoves Carter into him, with the electrodes killing Gibson.

The clock strikes 11:55 and Carter's plan has officially failed, leading to the radio announcing Carter's death. An angry Carter grabs the radio and is electrocuted to death by the object. 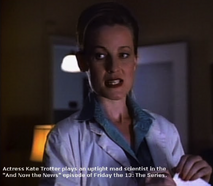 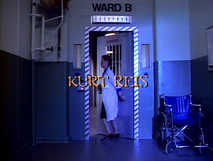 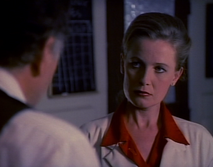 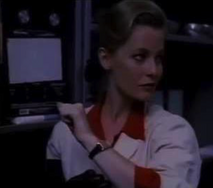 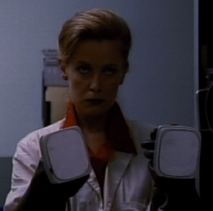 Carter attacking Hines with a lamp

Carter electrocuted by the radio after her plan fails

Retrieved from "https://femalevillains.fandom.com/wiki/Dr._Avril_Carter_(Friday_the_13th:_The_Series)?oldid=206986"
Community content is available under CC-BY-SA unless otherwise noted.