Dr. Anna Clarke (Sophia Myles) is a hidden villainess from "The Team: Part 1" and "The Team: Part 2", the two-episode season one finale of Crossing Lines (airdate October 9, 2014). She was a noted psychiatrist at a maximum security prison in France, with one of her patients being prisoner Lucien Fiori.

Anna was seemingly taken as a hostage during a prison break orchestrated by Fiori, which was done via hacking the prison to set off a power outage. Anna was later found tied up and blindfolded in an abandoned house where the gang had been residing, having been tracked there by cell phones Fiori and his convict partners stole during a jewelry store robbery. Afterwards, Anna declined going to the hospital and instead retreated to a villa she lived at with one of her former clients, where she was questioned by ICC investigator Carl Hickman. During his visit, Hickman took notice that Anna didn't behave as a typical kidnapping victim.

It was ultimately discovered by Hickman and his other ICC investigators that Anna had conspired with Fiori to break him out of prison, with the CCTV footage of her abduction exposing her; as she didn't flinch when Fiori grabbed her. When confronted by Hickman, Anna broke into tears and claimed that Fiori had used her to commit his escape while bemoaning how her life was ruined because of him. In exchange for protection, Anna revealed the target Fiori and his accomplices were after: a high-scale jewelry auction in Cannes.

However, after the convicts were arrested, Hickman confronted Anna about having lied about Fiori's plans; she made it appear they were going directly to the auction when they really were targeting the bank where the jewelry for the auction was stored. In response, Anna callously stated that her involvement in the plot was a result of "boredom", with Hickman reminding her that six police officers had been killed and ICC investigator Tommy McConnell had been shot as a result of Anna's scheme. Suddenly, the evil Anna pulled out a gun, intending to kill Hickman to stop him from turning her in. When investigator Louis Daniel entered the house and tried to stop Anna, the villainess turned and fired three bullets at him, with a sinister grin spreading on her face as Daniel slumped to the ground. As Hickman tended to the mortally wounded Daniel, Anna calmly walked away, ignoring Hickman's pleas to call an ambulance. 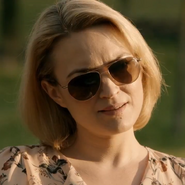 Anna's evil grin after shooting Louis Daniel
Add a photo to this gallery
Retrieved from "https://femalevillains.fandom.com/wiki/Dr._Anna_Clarke_(Crossing_Lines)?oldid=105483"
Community content is available under CC-BY-SA unless otherwise noted.