Start a Wiki
watch 01:51
The Loop (TV)
Do you like this video?
Dr. Amelia Chronos is an antagonist in the 1996 episode "A Comedy of Eras" for the TV series, "The Mask: The Animated Series".  Amelia was voiced by Victoria Carroll.

Dr. Chronos used time travel to make herself the ruler of present day Edge City and sent Stanley to the time of Salem Witch trials using her stopwatch.

The scientist convinced the people of the time that Stanley is a witch. But Stanley as The Mask turns the tables on the scientist and used her stopwatch to get the townspeople to think that she is a witch.

At the end of the episode, the citizens of old Edge City chased Chronos out of town and Stanley returns to the present.

Dr. Chronos returns and plants a time device on The Mask when she was dancing with him at the Coco Bongo. The device kept teleporting The Mask half an hour before the present time and creates a duplicate of Amelia. Her main objective was to take over Edge City using her duplicates, but The Mask throws the time device into a wormhole that Chronos created and smashed the mad scientist with a clock tower as the device continously replays it. 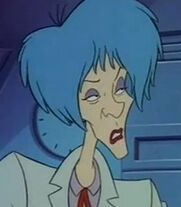 Add a photo to this gallery
Retrieved from "https://femalevillains.fandom.com/wiki/Dr._Amelia_Chronos_(The_Mask:_The_Animated_Series)?oldid=94597"
Community content is available under CC-BY-SA unless otherwise noted.