Start a Wiki
watch 01:48
The Loop (TV)
Do you like this video?
Dr. Allison Crawford (Catherine Lough Haggquist) is the hidden main villainess from Season Five of Project Mc² (airdate September 15, 2017). She is the director of Space Inc., a flight center agency.

Allison was introduced in the season opener, "If You Fail on Mars, Can Anyone Hear You Scream," where she was heading the company's Destination Mars camp. The camp was attended by the NOV-8 group, as they were investigating the theft of a dangerous nanotech prototype. Allison was one of three scientists who had full access to the code to the area where the prototype was kept; the others being Professor James Kato and Dr. Charles Coyle (Camryn Coyle's father).

Kato's disappearance made him a suspect, and in the following episode, "Nanobots, Souffles, and Gray Goo, Oh My," Allison was asked about Kato by Bryden Bandweth and Adrianne Attoms (who went undercover), responding that Kato tried to warn her about the prototype, but also attempted to portray Kato as the thief. McKeyla McAlister later found video of Kato warning Allison about the prototype, and he was later found by NOV-8 in a hidden bunker, where he sent a distress signal--which revealed that he was actually abducted and not in hiding.

The end of the penultimate episode, "Totally Marble Nailed It," revealed that Tessa Wallis, a 12-year-old prodigy, stole the prototype, as she committed the theft in the final scene. Jenny Wallis, the woman posing as Tessa's mother, was revealed to be part of the conspiracy in the finale, "Gray Goo on the Loose," as she was shown scolding Tessa about her unwillingness to continue with the scheme. Their conversation was overheard by Ember Evergreen, who stood up to Jenny in defense of Tessa when Allison suddenly arrived. Ember was delighted to see Allison, believing that she would stop Jenny.

However, Allison turned heel and revealed herself as the mastermind of the theft, as well as the kidnapping of Kato and the attempt to eliminate some of the NOV-8 members. The villainess snarled that she wouldn't let "a bunch of children" stop her plan, which was followed by both Allison and Jenny chasing after Ember and Tessa. Allison's plan was to sell the prototype and make a huge profit, regardless of whether it ended up in the wrong hands. Both villainesses were caught by McKeyla, Bryden, and Adrianne, after which, Allison gave herself up and surrendered. Shortly afterwards, though, the evil Allison activated the prototype, putting Tessa, Ember, Camryn, and Kyle at risk--as they were in the room with the weapon. Allison gave a sinister chuckle as she watched from the window, right before she was taken away.

At episode's end, after everyone was saved, Allison was officially arrested for her villainous plot, and was encountered by a shocked Kato, who asked why she could do such a thing. In response, Allison voiced her bitterness over Kato taking credit for what she felt was hers and hers alone, and wanted to reap the benefits. 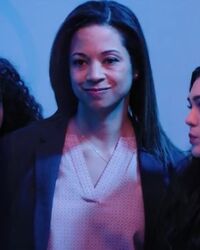 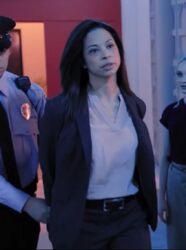 Allison handcuffed and arrested
Add a photo to this gallery
Retrieved from "https://femalevillains.fandom.com/wiki/Dr._Allison_Crawford_(Project_Mc%C2%B2)?oldid=175143"
Community content is available under CC-BY-SA unless otherwise noted.