Doronjo is the sexy female leader and femme fatale of the Doronbo gang.  This gang consists of her assistants pig-nosed muscleman Tonzra (Kendo Kobayashi) and rat-faced mecha genius Boyacky (Katsuhisa Namase).  Their quest is to obtain the mystical skull stone.

Each week the Doronbo gang fail due to their incompetence.  Their nemisis is Gan Takada (Sho Sakurai) and his girlfriend Ai-Chan (Saki Fukuda). 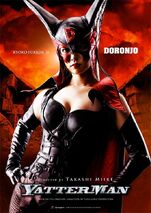 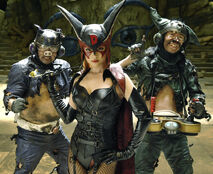 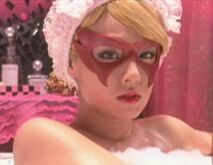 Add a photo to this gallery
Retrieved from "https://femalevillains.fandom.com/wiki/Doronjo_(Yatterman_2009)?oldid=81244"
Community content is available under CC-BY-SA unless otherwise noted.