Doronjo is an attractive blonde who leads the criminal gang known as Doronbo. This gang was recruited by the mysterious Dukurobei to retrieve the fragments of the skull or dokuro stone in the original version, and the dokuro rings in the 2008 remake.

The individual episodes of both versions of Yatterman follow a similar plot. The Doronbo gang is told of the location of a stone fragment or ring by the mysterious Dukurobei. Typically, Dokurobei delivers his message through an exploding gadget, which tears Doronjo’s clothes, humiliating her. The gang then sets up a fraudulent enterprise to earn a quick buck in order to build a robot, or mecha. The gang then proceeds to the location indicated by Dokurobei; however, they are stopped in their tracks by Yatterman 1 and 2 and their mechas. Typically, the Doronbo gang robot would get the upper hand in the initial phase of the battle; however Yatterman would feed his mecha an energy pill. This prompts the mecha to produce small robots that dismantle or destroy the Doronbo robot. Doronjo and her accomplices are attacked and humiliated by the robots. They do however escape, but only to be punished and humiliated by Dokurobei. 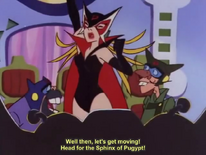 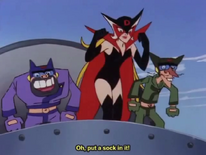 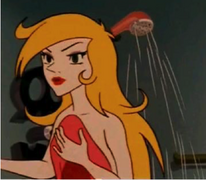 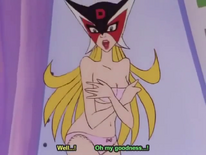 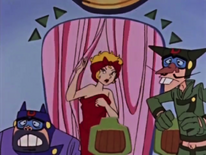 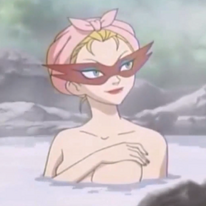 Retrieved from "https://femalevillains.fandom.com/wiki/Doronjo_(Yatterman)?oldid=129341"
Community content is available under CC-BY-SA unless otherwise noted.