Start a Wiki
watch 01:48
The Loop (TV)
Do you like this video?
Doris Robinson (Betsy Russell) is the main hidden villainess for the episode 20 of season 3 of Murder, She Wrote: "Menace Anyone?"

Doris was involved with a man named Brian East (Bryan Cranston). During the summer while she was away, Brian fell in love with a tennis player named Carol Mcdermott (Linda Hamilton). Furious after their break up. Doris decided to get rid of Carol to get back together with Brian. She rigged Carol's car with a bomb, so when she turned the ignition key, the car would explode killing her. Unfortunately Brian turned the key instead. That drove her mad. Doris then went over to carol's house to finish the job. Unfortunately an investing police detective named Lt. Tad Travis (David Spielberg) was also there. After learning that Carol was in an insane asylum after having a nervous breakdown after the death of her sister Barbara (Karlene Crockett) who died in a plane crash years ago. Realizing that once he caught her there, he would make the connection. She stabbed him with the knife that she originally was going to use on Carol. When Carol came home and found Travis' dead body and saw Doris leaving , she assumed that it was her late sister Barbara. When Doris' father Elliot Robinson (Van Johnson), found the bomb in her room, she had admited everything. In order to protect her from going to prison. Elloit planted the TNT, in Carol's house and a torn photograph of Carol to make the police believe that Carol had a split personality of her sister Barbarba. It was then revealed that Barbara was not the one who was killed in the plane crash, but a hitchhiker who stole her ID. Doris was then revealed to be the killer, when Elliot confessed to everything. Doris was then arrested offscreen for the two murders and Carol's attempted murder. It's possible that she later got medical treatment. 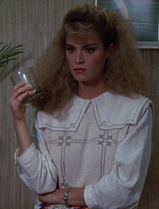 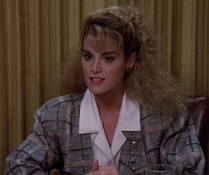 Add a photo to this gallery
Retrieved from "https://femalevillains.fandom.com/wiki/Doris_Robinson_(Murder,_She_Wrote)?oldid=185359"
Community content is available under CC-BY-SA unless otherwise noted.