Duchess Donna Savage was exile to the island more than two hundred years ago. After this island began to be considered a place of death, and the sailors did not risk landing there. One day a young hunter and adventurer sailed on the ship and, learning about this island, he jumped overboard. Soon after, he was unconsciously brought to the shore of the island by waves. When he woke up, he saw three men standing above him. Raising his head up, he realized that they were not alive. Three servants of the Duchess took him to the chateau in which their mistress was located. The Duchess talked with Walter and said that he would participate in the hunt. Then she showed him the heads of the men she had killed, who had previously been brought to the island by sea waves. Then Walter was placed in a cell, and the next day he was given a knife and the duchess said that she gave him 30 minutes to hide. Walter began to run and soon hid in a tree. But the servants of the Duchess very quickly found him and began to shake the tree. Because of this, he fell off a cliff by the sea. The Duchess thought that he died, falling on the reefs and began to scold her servants. But Walter did not die. He was able to fall on a small ledge in the rock. And then he saw that there was a tunnel and began to crawl along it. At the end of the tunnel he was in the basement of the chateau. Previously, there was a warehouse with gunpowder. Walter rose to the surface and in turn killed the three servants of the Duchess. Their bodies turned to dust. Then he went to the chateau and the duchess was very happy. On the wall, he saw the heads of three of her servants whom he just killed. The Duchess said that she had killed them before and they only lived by her will to serve her. She promised Walter that she would do the same with him. Walter was scared and pushed Donna into the fireplace. She was engulfed in flames and Walter fled from the chateau. Soon there was an explosion when the flame of a fire reached gunpowder in the basement and the chateau exploded.
Donna Savage appears in the story "Game for a mad huntress" in the comic book The Beyond 13 1952 on page 28. 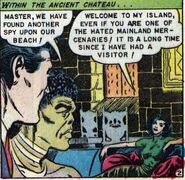 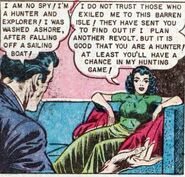 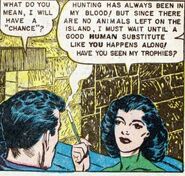 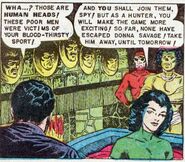 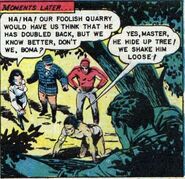 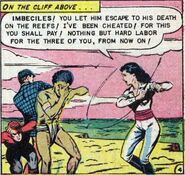 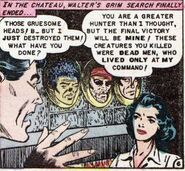 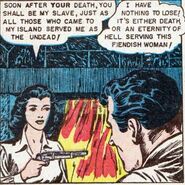 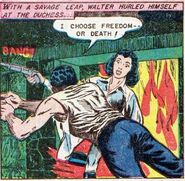 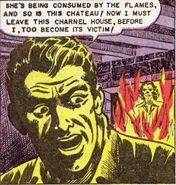 Add a photo to this gallery
Retrieved from "https://femalevillains.fandom.com/wiki/Donna_Savage_(The_Beyond)?oldid=161618"
Community content is available under CC-BY-SA unless otherwise noted.