Start a Wiki
watch 04:10
The Loop (TV)
Do you like this video?
Donna Germaine (Barbara Niven) was the main villainess from the 2005 Lifetime film, The Perfect Neighbor.

Donna's backstory only reveals that her parents split up when she was only eight, though she had always blamed her mother for driving her father away, her having frequently accused him of cheating. She revealed that she planned on killing her mother for revenge, but before Donna could get the chance, her mother suffered an accidental death--falling on the bathtub while drunk. Donna's past affinity for married men was also revealed; in fact, in a flashback at the very beginning of the film, she had killed her last lover after he refused to leave his wife for her.

After killing her last lover, Donna moved in with her maternal aunt, Grace Palmer, who was living next door to Jeannie and William Costigan, and their young daughter, Trish. After meeting William, Donna develops a romantic obsession with him, and already showed signs of jealousy when she saw him next to Ashley Marin, an employee at his company. Donna even went as far as to drug Grace to replace her for a babysitting gig with Trish, doing so after searching William online and printing out his picture. After Grace learns about her niece's obsession with William, Donna angrily confronts Grace, ending with the villainess pushing her aunt down a flight of stairs, killing her. After the murder, Donna used Grace's death to move into the Costigan home, and even took a job with William's company to grow closer to him.

Donna's next phase in her evil scheme was to get Ashley out of the way. After learning that William had an affair in the past, and that he and Ashley had spent a lot of time together on business, Donna decided to set Ashley up as William's latest mistress. She typed love letters to William in Ashley's 'name, and later infiltrated Ashley's home and placed photos of William everywhere, while also planting disks containing the love letters near Ashley's computer. Later on, Donna followed Ashley to the parking lot later at night, where she killed Ashley with a crowbar. With Ashley gone, Donna moved closer to William, especially after Jeannie was driven away after accusing William of cheating on her with Ashley.

Donna's attempt to seduce William was rejected, as he proclaimed his love for Jeannie. In the film's climax, Donna appeared to Jeannie and proclaimed her love for William, right before she pointed a gun at Jeannie with intent on killing her. After William enters, Donna points her gun at him as well, vowing not to lose him like she lost the others. At that moment, Jeannie wrestles the gun from Donna, but not before a non-fatal shot grazes William. Jeannie picked up the gun and searched for Donna, who lunged at Jeannie with a knife. Jeannie fatally shoots Donna, and before she died, Donna proclaimed that William didn't love her enough to be with her, apparently accepting the truth that it was her own evil behavior that drove William away from Donna forever. 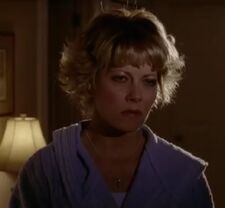 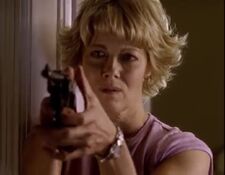 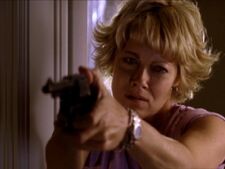 Add a photo to this gallery
Retrieved from "https://femalevillains.fandom.com/wiki/Donna_Germaine_(The_Perfect_Neighbor)?oldid=209884"
Community content is available under CC-BY-SA unless otherwise noted.