Start a Wiki
watch 01:48
The Loop (TV)
Do you like this video?
"Donna" is a villainess/henchwoman in Red Scorpion 2 (1994). She is played by redhead Suki Kaiser.

Donna is the girlfriend and minion of "Andrew Kendrick" (John Savage) the leader of a neo-Nazi white supremacist group bent on political power. Kendrick wears a modified Nazi uniform while ordering his uniformed henchmen to attack Christian clubs, separating then killing the minorities found there.

Donna follows his orders and seduces a member of the band of commandos who oppose the Nazis, while Kendrick watches on a hidden video camera.

Later, the villains capture "Sam", a female member of the commandos (Jennifer Rubin). Donna (in white shirt and khaki bush shorts uniform) is ordered to uncuff and bring Sam to the leader at gunpoint, but the agent gets the drop on Donna, who drops her pistol but pulls a knife on the rebelling Sam. After a rousing hand-to-hand battle, Sam throws Donna into the wall which thrusts the knife into herself, killing her.

Finally the commando team attacks the compound, rescue Sam and kill the rest of the neo-Nazis, the leader Kendrick being burned alive. 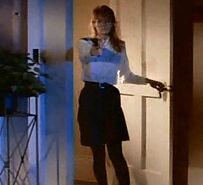 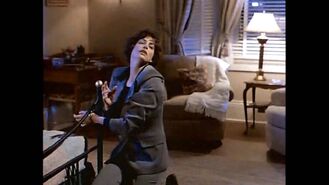 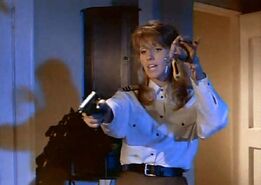 Donna dangles the handcuff key, then tosses it to Sam. 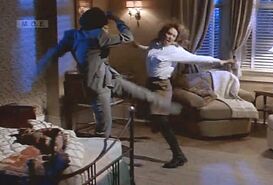 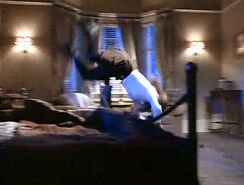 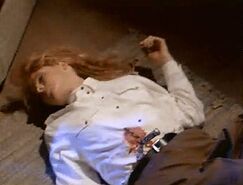 Donna is dead, skewered with her own knife.
Add a photo to this gallery
Retrieved from "https://femalevillains.fandom.com/wiki/Donna_(Red_Scorpion_2)?oldid=112073"
Community content is available under CC-BY-SA unless otherwise noted.