The evil blonde dominatrixes have three forms of attack, two that involve their whip. The first whip attack is her simply whipping the hero, the second whip attack involves her wrapping her whip around the hero's stomach and pulling on it, making it hard for him to breathe.

Her third attack involves her stomping on the hero when he is lying on the ground. She will walk over to him and stomp on him, causing damage, she will then grind her high heels into him.

Whipping a standing hero until he falls

Squeezing the hero's stomach with her deadly whip

Inflicting damage with her stomp and grind attack 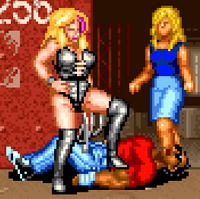 Standing triumphantly over the fallen hero, in front of the woman he was trying to rescue

Getting her face smashed in

Taking some knees to the face

Defeated
Add a photo to this gallery 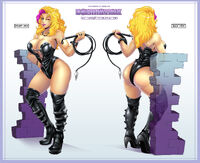 Fanart (by Sano-BR)
Add a photo to this gallery
Retrieved from "https://femalevillains.fandom.com/wiki/Dominatrix_(Vendetta)?oldid=89125"
Community content is available under CC-BY-SA unless otherwise noted.