The Female Villains Wiki
Register
Don't have an account?
Sign In
in: 1990s, A Taste Of Her Own Medicine, Adult Media Villainess,
and 20 more

Dolly is an aerobic instructor at "The Body Center Club - Aerobic Dance & Build". After learning that one of the women attending the gym, Sarah Clayton, is the daughter of a rich rubber entrepreneur, she hires two goons to kidnap the girl in order to ransom her.

Detective Jack "Stinkman" Lopuzzo decides to take the case. He visits the gym one Monday afternoon to investigate, only to find it closed. Determined, he goes in anyways, only to find Dolly washing herself in one of the showers. Immediately mistaking the man for a rapist, Dolly quickly brings him to climax with her hand before he is able to "assault" her. The situation is eventually cleared up and the woman agrees to help him with the case. She says that Sarah had been coming to the gym for about a year, but adds that she doesn't know any more than that.

Feeling that there's something fishy about Dolly, Jack later trails her to a secret room down in the sewers. There, he finds the two goons raping Miss Clayton. The detective manages to dispatch the two, only to then find himself held at gunpoint by Dolly. The villainess gloats that she'll soon be sending the meddlesome Jack to Hell, while she will be enjoying "Heaven on Earth" from all of that ransom money; particularly since he did the favor of eliminating her two partners, and thus, their cut.

However, Jack manages to swipe her handgun via a powerful magnet that he kept hidden under his shirt. Furious that her plans are now ruined, Dolly impales Sarah with a metal pole, killing her, and then flees. Jack chases Dolly, and is fooled into thinking that she has met her demise at the hands of an oncoming subway train. In reality, she instead waits for him in the shadows by the sewer entrance.

Dolly prepares to strike him with a shovel, but Jack manages to get the drop on her. Now holding her at gunpoint, the hero forces oral sex on her until she dies of suffocation.

Surprised at her first meeting with Jack... 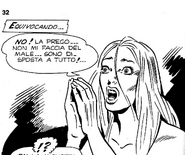 ...and grossly mistaking his intentions. 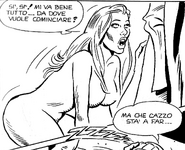 Eventually, it all gets cleared up...

...and she agrees to "cooperate" with the investigation.

Thinking the ball's in her court...

...but there's something she didnt' expect.