Start a Wiki
watch 01:48
The Loop (TV)
Do you like this video?
Dollface (Candice De Visser) is an antagonist in the 2015 slasher film The Funhouse Massacre and is arguably the most popular character of the film.

Dolface is also known as Ms. Eileen Quinn, and more commonly as the Stitch Face Killer, or simply Stitch-Face, is a psychotic mass murderer whom dresses like a clown and stitches the face of her victims closed.

Born Eileen Quinn, the woman who would one day grow up to become Dollface grew up in a cult run by her father Mental Manny. Implied to be one of many children that he had spawned over the years, her favorite sibling was Kate, whom she believed was her best and only friend.

One day during a routine ceremony in which one member would be burned alive as a human sacrifice, Kate's mother was chosen. Kate tried to save her mother from this fate but failed. The resulting scuffle caused the fire to rage out of control and the entire cult (with the exception of Kate, Dollface, and Mental Manny) were all killed in the fire.

Despite the role she had played in the cult's undoing, Dollface continued to exhibit a twisted, almost crush-like, sort of fondness for her sister. Stalking her into adulthood and killing various people (mainly women) to get her sister's attention.

While never confirmed, its implied that Kate knew Dollface's true identity or at least suspected that it was someone from her days in the cult.

Over time she became an urban legend.

Finding out the Truth Edit

At some point, through unknown means, Dollface eventually discovered that her father was still alive and was being held in a secret government funded mental asylum along with four other psychopaths.

Coming into contact with her father from behind bars, him and Dollface put together a plan to kill as many people as possible on Halloween night.

One stormy night, after killing a journalist whom had been assigned a story on the asylum and taking her place, Dollface infiltrated the asylum and after being shown the inmates including her father, she proceeded to kill the entire staff and free all the prisoners. 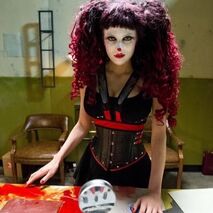 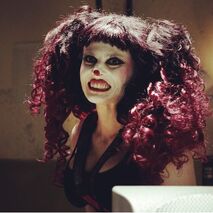 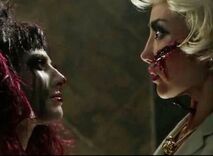 Add a photo to this gallery
Retrieved from "https://femalevillains.fandom.com/wiki/Dollface_(The_Funhouse_Massacre)?oldid=204912"
Community content is available under CC-BY-SA unless otherwise noted.