Dixie Love is hired by fast food king Wrangler Bob Bundy (Jim Varney) to go undercover and steal the secret sauce that is making his competitor so popular.  She is first seen taking a bubble bath when Bob calls her to put her to work in aiding him in his quest to thwart his rival chain.

Next we see her stroll into Pop's restaurant owned by Samantha Brooks (Tracy Griffith) and Auggie Hamilton (Clark Brandon) and apply for a job.  Samantha is immediately jealous that Auggie would hire her just because she is beautiful.

After closing time, Dixie stays behind to find the recipe and sauce.  Auggie hears a comotion coming from the storage room, and goes to investigate.  Dixie found a jar of the sauce and samples it.  The sauce is laced with a drug that makes the consumer horny, and therefore, she begins to strip out of her garage overalls.  Auggie finds her in her stripped down to her black bra and panties.  Just then Samantha shows up, and Auggie panics and puts Dixie in the freezer.  He applys pressure to the door in order to keep Samantha from seeing Dixie.  Finally, the door flies open and Samantha sees the sexy Dixie throw her arms around Auggie.  Samantha is disgusted and leaves thinking that Auggie and Dixie were having sex.

Next we see Dixie getting paid by Wrangler Bob Bundy for the information she obtained.  Bob decides to call the authorities since a halucinagenic drug has been laced in their sauce.

A trial takes place, and Dixie is by Wrangler Bob Bundy during the court hearings.  The judge finds for Samantha and Auggie after they prove that the drug was all natural.  Wrangler Bob Bundy tells his thug to grab the jar of the sauce while Dixie jumps on the back of the person who has it.  The jar falls to the ground and it breaks open, spilling the aroma all through the courtroom.  We soon see the judge and several of the women begin stripping including Dixie. 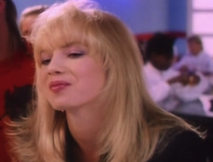 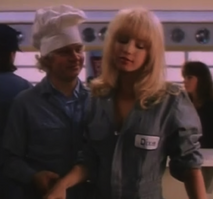 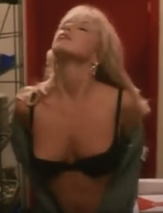 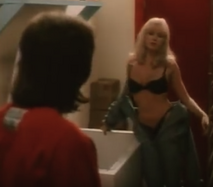 Add a photo to this gallery
Retrieved from "https://femalevillains.fandom.com/wiki/Dixie_Love_(Fast_Food)?oldid=208496"
Community content is available under CC-BY-SA unless otherwise noted.