Diane Simmons (Lori Alan) was a recurring character from the first eight seasons of Family Guy, serving as the co-anchor for Channel 5 News in Quahog. She was also the hidden main villainess of the show's famous Season 9 opener, "And Then There Were Fewer" (airdate September 26, 2010).

Since the series' premiere, Diane Simmons co-anchored Channel 5 News with Tom Tucker. A year prior to the events of "And Then There Were Fewer," Diane met actor James Woods at a press event, and they began a secretive sexual relationship. Months later, Diane turned 40, and she witnessed Tom campaigning to have her replaced with a younger female anchor, and succeeding. On top of the news that she would be out of a job in three weeks, James broke up with Diane for unknown reasons.

Dejected and angered by what had occurred, Diane encountered Priscilla, a young news intern—and decided to use her eagerness to get into the reporting business as part of an evil revenge plot against her ex-boyfriend. The villainess paid her co-conspirator to seduce James into having a relationship with her, and once that was done, she also ordered her to convince her boyfriend to become a born-again Christian and make amends with everyone he wronged in the past.

Diane's machinations led to the events of the episode, where James arranged a gathering at his mansion to make amends to those he plagued, which included the Griffins, Tom Tucker, Glenn Quagmire, Joe and Bonnie Swanson, Mort and Muriel Goldman, and various other characters. Diane had planned to kill James at said gathering, doing so with a gun that was hooked to a kitchen timer—which was meant to go off and kill James during dinner. She would then plant the gun in Tom's suitcase, framing him for the murder, and it would leave Diane as being Channel 5's sole anchor. Her plan hit a snag when Quagmire's date, Stephanie, sat in the seat intended for James, and she ended up being on the receiving end of the fatal bullet.

Stephanie's murder forced Diane to improvise, and during the power outage, the vengeful villainess grabbed a knife and stabbed James in his back, killing him instantly. However, with the weapon having her fingerprints on it, Diane waited until she was alone to remove the knife from her second victim, as as she was doing that, Priscilla suddenly woke up and observed what she was doing; realizing Diane's true motives and intentions, she became hysterical. Fearing that Priscilla would reveal the truth, the evil Diane slashed the former's throat during her attempt to escape and placed her corpse in Tom's room. The callous murderer was caught by Muriel Goldman during her attempt to plant the knife in Tom's suitcase, prompting her to stabbed the latter to death in order to keep her quiet.

However, Muriel's scream was heard by the rest of the group, which prevented Diane from removing the knife. Before the group arrived at the scene of the crime, Diane wiped her fingerprints off the knife and ran off, only to return to said scene with the rest of the group. Later on, the twisted criminal noticed Derek (the date of Brian's ex-girlfriend, Jillian) heading to the balcony to call the police, which would wreck her plan to frame Tom for the murders. With that in mind, she grabbed James' Golden Globe and bludgeoned Derek to death with it before hiding the now bloody weapon in Tom's room. After Joe found said weapon, Tom was arrested for the murders.

The morning after Tom's arrest, with everyone packing and leaving, Lois approached Diane regarding Tom. When asked by Lois if she would anchor the news alone, Diane stated that it would be the case, and she showed Lois an outfit that her mother gave her for her first solo newscast. Lois wondered how Diane could prepare for such an occasion beforehand, and it was at that moment that the former realized that the latter was the true killer. The villainess cemented her reveal by pointing a gun at her former friend as she explained her plan and the murders in painstaking detail. With Lois now knowing everything, Diane stated she would have to kill her as well, and the latter held the former at gunpoint as she led her out of the mansion and to the edge of a nearby seaside cliff. Diane stated that Lois would end up on the 6:00 news after her death, and was prepared to shoot and kill her—only to be shot herself and sent falling to her death by Stewie (unbeknownst to Lois), who stated that "If anyone's going to take that bitch down, it's going to be me." 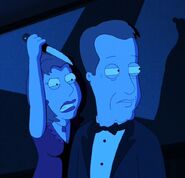 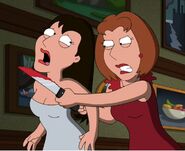 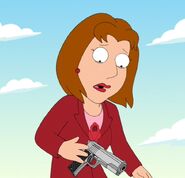 ...only to be shot by Stewie and sent falling to her death.
Add a photo to this gallery
Retrieved from "https://femalevillains.fandom.com/wiki/Diane_Simmons_(Family_Guy)?oldid=187256"
Community content is available under CC-BY-SA unless otherwise noted.