Diane Duran (a parodied name based on the 80s band, Duran Duran) is a Special Agent for the FBI; a tech expert sent to help the RHCU on a case involving a sinister hacker breaking into a website for adulterers. The hacker dressed in a hoodie and a demon mask, and was threatening to reveal all of the names of the customers on the site.

During a stakeout to find the hacker, Diane is revealed as the villainess when she removes her mask while being chased by Angie, and later escapes. Angie later catches Diane entering a building owned by Mayhem Global, and it is revealed that she was hired by them to hack into the website, and then hack the RHCU to divert suspicion. In the episode's climax, the evil Diane caught Angie inside the building thwarting her plans, and points a gun at her. The women engaged in a humorous battle that saw them both change into different outfits, and it ends with Angie defeating the villainess and arresting her. 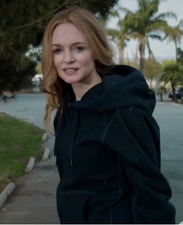 Diane pointing her gun at Angie
Add a photo to this gallery
Retrieved from "https://femalevillains.fandom.com/wiki/Diane_Duran_(Angie_Tribeca)?oldid=132839"
Community content is available under CC-BY-SA unless otherwise noted.