Diane (Nicollette Sheridan) is a henchwoman in the 2007 movie, Code Name: The Cleaner.

Diane, is the henchwoman tasked with retrieving lost memories from Jake. She pretends to be his wife in order to find the location where Jake hid valuable and dangerous chips. However,   Jake appears to be suffering from temporal amnesia. His evasive 'abilities' cause his enemies and himself to believe that he was once a secret agent. Upon the doctor's advice,  Diane tries to get Jake to jog his memory by pretending to be his wife and seducing him in the bedroom with sexy lingerie. Jake escapes their 'house' by 'leaping' onto a car and driving away.  With her boss defeated, she tries to flee the scene of the crime only to engage in a catfight with Gina (Lucy Liu).  During the fight, Jake imagines the two women in a hot tub wearing lingerie. Gina stages a comeback and Diane is left nursing a sore back on the ground. Diane is arrested by police while performing the stereotypical villainess 'look at the hero while arrested' look.

Catching Jake in the hotel and spotting the police

Pretending to be his wife and kissing him

Jake: "Who are all these white people?"

Exasperated that the 'arousal' isn't working

Reporting to her boss 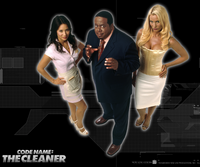 About to feed Jake the truth serum 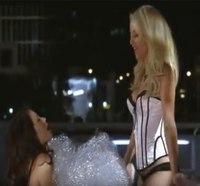 Jake running up to deliver the bad news

Looks back at ( ) while being led away

Add a photo to this gallery
Retrieved from "https://femalevillains.fandom.com/wiki/Diane_(Code_Name:_The_Cleaner)?oldid=205056"
Community content is available under CC-BY-SA unless otherwise noted.