Diana is a vampiress who in 1897 in Southern California, seduced Roxanne (Kennedy Johnston).  When Roxanne's brother Dumas noticed, he with the help of Padre Jacinto set off to find her.  They found Roxanne, and staked Diana or her brother Lord Ruthven with a silver dagger.  Padre vowed to fight against such evil until it was eradicated from the world.

Fast forward to present day Los Angeles.  Count Dracula learned that the remains of his buddy Lord Ruthven was in Los Angeles.  Therefore, he sent out his daughter Martine along with their servant Renfield in order to bring Ruthven back to unlife and deliver him a copy of The Ruthvenian, the vampire's Bible written in blood.  After locating Ruthven, the awoke him by removing the dagger.

Ruthven told the story of how he and his sister Diana vied for the love of Roxanne, and how it led to their deaths.  Now restored, Ruthven vowed to find Roxanne again.  Ruthven is unable to drink the blood of his first victim, a stripper named Lilith.  He finds that he has been cursed by Padre Jacinto so that he cannot drink.  He consults the Ruthvenian and finds that his blood has been poisoned by the consecrated silver dagger and the only way he can do so, is to first have it filtered through the veins of another vampire.  Therefore, he pulls the stake from Diana's heart and brings her back to life too.

Diana is also thirsty and goes looking for blood.  She stops at a strip club, where she becomes enchanted by the same stripper.  Diana follows Lilith home, seduces her, and turns her into a vampire.  Later, when Ruthven begs her for some nourishment, Diana slits a breast and collects the blood in a cup for Ruthven.

A number of victims later, leave his sanctuary and begin his search for Roxanne.  Unfortunately for Ruthven, Diana finds Roxanne first and brings her back to their lair in order to taunt her brother.  Ruthven is so angry at Diana for possessing Roxanne again that he replaces the stake in Diana's heart only to find that, when Roxanne awakens, she wants Diana.  Therefore, Ruthven is just about to stab Roxanne with the silver dagger when Padre Jacinto's spirit appears and forces Ruthven to use the dagger on himself.  With both Ruthvens now destroyed, Padre Jacinto is free to rest.

Dracula sends out Martine and Renfield once more to tell the Ruthvens to cool it.  When they arrive at the Ruthven's sanctuary however, they find both Diana and Ruthven have been destroyed.  However, Roxanne and Lilith are still there, so Martine bring them along with all of Diana's victims (now turned vampire). 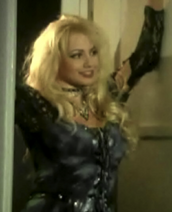 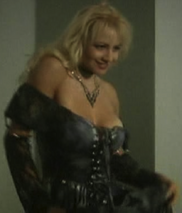 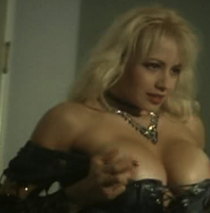 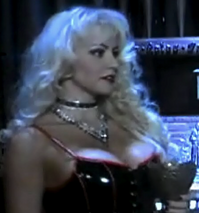 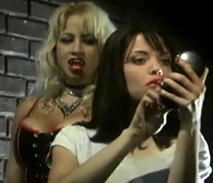 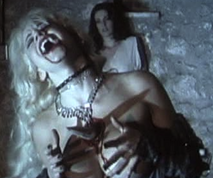 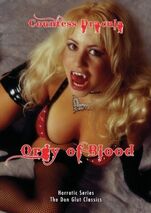 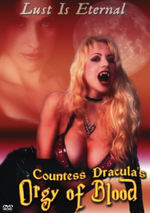 Add a photo to this gallery
Retrieved from "https://femalevillains.fandom.com/wiki/Diana_Ruthven_(Countess_Dracula%27s_Orgy_of_Blood)?oldid=198338"
Community content is available under CC-BY-SA unless otherwise noted.