The Female Villains Wiki
Register
Don't have an account?
Sign In
Advertisement
in: 1980s, Assisted Rape, Chaotic Evil,
and 14 more 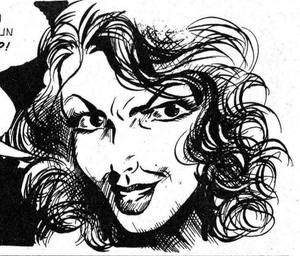 Diana is one half of the embodiment of "pure evil" with the remaining half being the story's other antagonist, her brother Floyd Ardkens. Together, they have been around for millennia and have tricked humans into damning themselves.

In the case of this story, they trick the protagonist, Pamela, into stealing a demonic book by discreetly piquing her curiosity about it. After she does so, Pamela is haunted by numerous horrifying nightmares related to various tortures depicted in the book's pages. At the end of the story, Diana and Floyd reveal to her that they are not nightmares, but that she is in fact trapped in a labyrinth of which no exit exists. And so, Pamela shall be subjected to each of the tome's tortures over and over, for all eternity.