Start a Wiki
watch 01:51
The Loop (TV)
Do you like this video?
Diana (Erika Nann) is the main villainess from the 1990 movie Legion of Iron.

Amateur athletes (and their girlfriends) are kidnapped from around the world and brought to the secret subterranean desert lair of "Queen" Diana, to be trained to fight to the death in gladiatorial matches.

Rich gamblers attend the matches, placing their wagers on the fighters electronically. Diana presides over the fights from her throne and takes a big cut in the purse.

A twisted megalomaniac, Diana tolerates no arguments from the men in training nor the girls who are pooled into a harem for the men. She beds down with some of the winners, promising their freedom by continuing to win the death fights, but no one has ever achieved that goal.

A young couple finally escapes into the desert, pursued by Diana in her machine-gun equipped plane.

She dies from a fall out of a plane following a fight with Kevin Walsh's character. 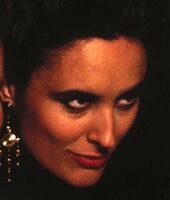 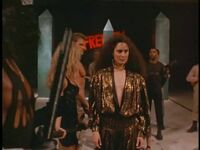 Diana visits her gladiators in training. 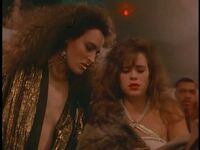 "You will be a whore for my Legion."

1The "Queen" is pleased by the money she is raking in. 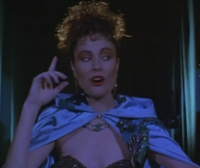 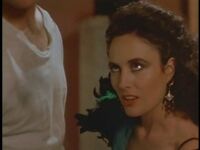 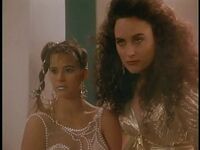 The girl is no longer the hero's "steady". 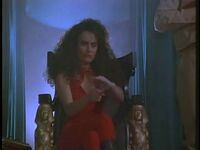 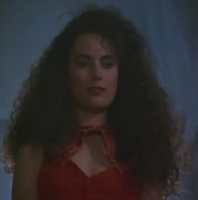 Diana in her ultra light aircraft.

It's a shooting gallery in the desert when she goes after the escaping couple.

Add a photo to this gallery
Retrieved from "https://femalevillains.fandom.com/wiki/Diana_(Legion_Of_Iron)?oldid=160528"
Community content is available under CC-BY-SA unless otherwise noted.