Start a Wiki
watch 01:21
The Loop (TV)
Do you like this video?
Detective Inspector Walker, aka The Undertaker (Marina Sirtis) is the main villainess from the 1996 film, Gadgetman (alternately titled, Operation Gadgetman). She is the lead detective on the case after Professor McNeil is kidnapped by Lonnie and Donnie, a pair of bank robbers working for a dangerous criminal known as The Undertaker.

Walker and Sergeant Munro arrived at McNeil's home, where they meet his son, Bean, and his friends. Walker was looking for the professor due to the rumors that he robbed the bank that he and Bean frequented, also where McNeil's invention caused a large amount of money to shoot out of an ATM, which led to the kidnappers seizing him. When Chip and Sumo let out that the professor's been kidnapped (despite Bean's protests), Walker stated that she'll look into the matter, and she later finds the kidnappers and arrests them. However, they are quickly released, and they hold Bean hostage at the same warehouse that they were holding Professor McNeil.

Walker turned heel after she arrived at the warehouse with Munro, and revealed herself as The Undertaker. After her villainous reveal, the evil Walker announced that she would be taking the professor and head off to Mexico, and regarding Lonnie and Donnie, she stated that she would simply allow them to live after their participation. Walker placed Professor McNeil on her boat, only for Bean to jump on and rescue his father, while also knocking Walker off her boat and into the water. As a newspaper article later revealed, Walker was arrested for her kidnapping plot. 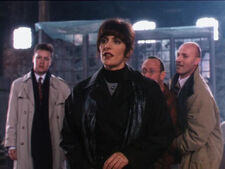 Walker revealing herself as a villainess known as The Undertaker 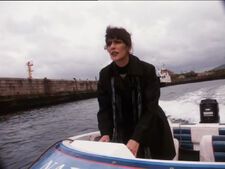 Walker attempting to escape on her boat 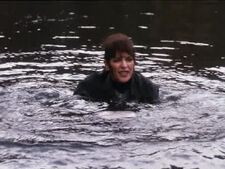 A defeated Walker knocked off her boat
Add a photo to this gallery
Retrieved from "https://femalevillains.fandom.com/wiki/Detective_Inspector_Walker_(Gadgetman)?oldid=205722"
Community content is available under CC-BY-SA unless otherwise noted.