Start a Wiki
watch 01:48
The Loop (TV)
Do you like this video?
Despera (Kristin Norton) is the main female antagonist during the second season of the TV series VR Troopers.  She appeared in 33 episodes.  Despera was portrayed by Jun Yoshida in the Japanese footage.

Despera is the henchwoman and strategist to Karl Ziktor alias Grimlord (Gardner Baldwin), who is the main antagonist and also who created her.  She was the sister of Desponda (Andrea Harmon).  Unlike her Japanese counterpart, she doesn't fade away after Oraclon's destruction.

Despera dressed in an elegant white robe and a horned headdress.  She wielded a large scepter.  Despera was quick to lose her temper and is an immensely powerful warrior.

Despera clashed with Ryan Steele (Brad Hawkins), who battled her through various dimensions.  In one dimension, she could float and blast purple electricity from the sphere on her staff.  In another dimension, Despera seemed to turn invisible and attacked by throwing her staff around like a spear. Ryan also encountered another dimension, while involved in a battle with her, that was like a giant, slowly revolving crystal ball. Ryan escaped this dimension by blasting the crystal ball walls a few times with his laser pistol.

Ryan defeated Despera in battle, by tricking her into zapping a trap wall in the temple containing Grimlord's secret identity. She was struck in the shoulder by an arrow, and after removing the arrow, promptly retreated. 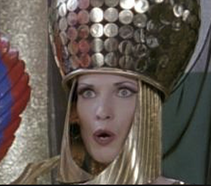 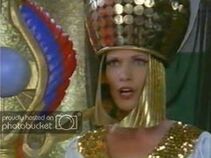 Add a photo to this gallery
Retrieved from "https://femalevillains.fandom.com/wiki/Despera_(VR_Troopers)?oldid=134429"
Community content is available under CC-BY-SA unless otherwise noted.