Start a Wiki
watch 01:48
The Loop (TV)
Do you like this video?
Desiree is a genie ghost who wanders the world granting anyone their deepest desires. The more wishes she grants, the more powerful she becomes. She is one of the few ghosts in the series shown to have had a previous human life on Earth.  She was voiced by Peri Gilpin.

Before she died, Desiree was a harem girl who won the heart of a sultan. He promised to grant her all of her heart's desires and even a kingdom of her very own. However, she was cast away from the palace by the sultan's jealous wife. Dying of a broken heart and old age, Desiree's spirit wandered around as a ghost, forever granting others' wishes.

Desiree somehow lands in a genie bottle, which ends up on display at a swap meet in "What You Want." Desiree is freed by a little girl who begs her mother for cotton candy when her balloon knocks her bottle over breaking it. She grants the girl's wish by producing a tidal wave of cotton candy that destroys the swap meet. Danny fights her and uses his ghost ray for the first time to blast her away.

Afterwards, she continues granting other wishes: turning Dash into a huge monster to crush the other football team, turning Paulina into a cute anime character, and making a surfer's car able to fly.

Tucker, jealous of Danny's ghost powers, wishes for ghost powers of his own. Desiree grants his wish, turning him into Tucker Phantom. Danny captures Desiree by wishing her to disappear into the thermos then defeats Tucker Phantom.

She makes a brief appearance in "Prisoners of Love" as one of the many ghosts in jail. She helps Danny escape from Walker's prison.

Desiree later gets another starring role in "Memory Blank" when she arrives in time for the meteor shower, during which many people will be making wishes. She plans to be there to grant as many wishes as she can to gain as much power as she can. When Sam has a fight with Danny and wishes she never met him, Desiree grants it and creates a world where Danny never met Sam and thus never gained ghost powers. Sam finally wishes to take back the wish she made prior, causing everyone's memories of her and Danny to be restored and Desiree to be defeated once again.

Desiree has another small appearance in "Reign Storm" when Skulker led millions of ghosts out of the Ghost Zone. She was among the ghosts who took refuge on Earth after Pariah Dark seized control of the entire Ghost Zone.

She returns again in "The Fright Before Christmas" as one of the many ghosts who help Danny save Christmas.

She is seen briefly in the series finale "Phantom Planet," first attacked by Masters' Blasters at the beginning and then at the end helping Danny and the other ghosts save the Earth.

Desiree is a tall, slim, green-skinned ghost with red eyes, extremely long black hair, and a ghostly blue tail. She wears purple lipstick, a blue headband, and a purple necklace. She has two metallic purple cuffs on each arm, one on her bicep and one on her wrist, and she has two blue bangle bracelets on her right wrist and one on her left. Desiree's outfit consists of Arabian attire, which includes a blue strapless crop top with purple trim, along with a metallic purple belt with a blue jewel in the center, which hangs over her tail.

Desiree is a rather vindictive genie. Her wishes reflect this as they often have grave consequences beneath them. She also uses the wishes of others to her advantage. Her love tragedy gives her a rather low opinion of men; she refuses to let any man touch her unless she wishes it.

She cannot refuse to grant a wish. She is forced to grant any wish she hears, even if it would lead to her downfall. 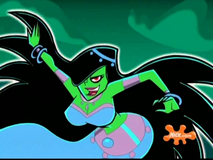 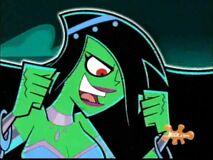 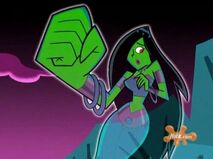 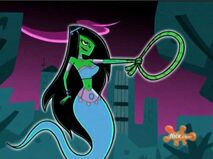 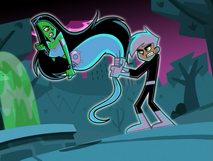 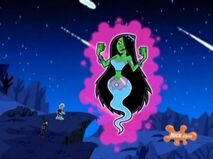 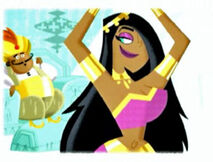 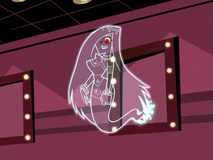 Add a photo to this gallery
Retrieved from "https://femalevillains.fandom.com/wiki/Desiree_(Danny_Phantom)?oldid=159507"
Community content is available under CC-BY-SA unless otherwise noted.