Start a Wiki
watch 01:50
The Loop (TV)
Do you like this video?
Desire, aka Mona (Barbara Stock) was the titular main villainess in the 1982 film, Desire, the Vampire (alternately titled, I, Desire). She was a vampiress who had been prowling the dark streets of various towns before arriving in Los Angeles, in the guise of a nurse named Mona.

Mona worked at the same hospital as the main protagonist, David Balsiger, who worked as a coroner's assistant, and she came in physical contact with David at one point when she attacked him. After his encounter with the vampiress and learning more about her from an ex-communicated priest named Paul (all the while unaware that the villainess was watching from nearby), David encountered Mona he was driving down the street, and he later drives Mona to her home.

Mona later invited David into her house, and it was there that Mona's heel turn began; as she attempted to seduce David before going upstairs to change clothes. She slowly walked downstairs in a black gown and continues seducing David, who resists her villainous advances and headed upstairs to the bathroom. Mona turned heel and revealed herself as the vampiress, Desire, flashing her fangs at David as she followed him upstairs. Shortly afterwards, the evil Desire continued to pursue David and managed to trap him on a balcony, but while leaping towards him, the villainess fell to her death. 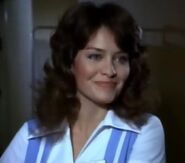 Mona as a nurse

A close-up of Desire's fangs

The evil Desire, with her fangs elongating

Desire with her fangs fully elongated 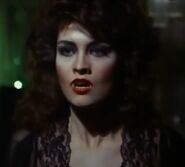 Desire closing in on David

Retrieved from "https://femalevillains.fandom.com/wiki/Desire_(Desire,_the_Vampire)?oldid=199351"
Community content is available under CC-BY-SA unless otherwise noted.