Desdemona (Sofia Vergara) is the antagonist of the 2013 action packed movie "Machete Kills".

Desdemona is the leader of a deadly group of women in a brothel. While sexy in appearance, these women are extremely vicious and brutal (especially to men).

Machete first encounters Desdemona when he tries to find Cereza, the one who can lead him to Mendez. Desdemona pretends to go get Cereza, only to put Machete into a trap. Machete finds Cereza and gets away.

At a pier where the two are prepared to be picked up by Mendez's men, Cereza reveals that Desdemona is her mother. While Machete and Cereza are on the plane headed to Mendez's mansion, Cereza is unexpectedly killed by one of Mendez's henchmen. This enrages Desdemona, and she is next seen torturing an unnamed man, and lets him know how much she hates men before killing him.

Desdemona and her followers eventually become a part of an intense car chase with Machete and La Cameleon. Machete gets his followers to crash, and thus he and Mendez escape.

Desdemona is not seen again until the end of the film, which highly suggests that she will return should the film get a sequel. 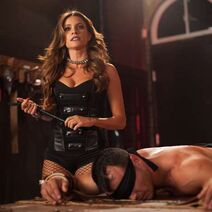 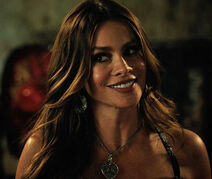 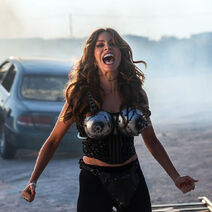 Add a photo to this gallery
Retrieved from "https://femalevillains.fandom.com/wiki/Desdemona_(Machete_Kills)?oldid=222362"
Community content is available under CC-BY-SA unless otherwise noted.