Denise Sparks (Jama Williamson) is the villainess from "The Silver Briefcase," episode 7.05 of The Mentalist (airdate December 28, 2014).

Denise Sparks is a data analyst working for the Department of Defense at the Wynn Complex, and as revealed later on, she was the evil mistress of Colonel Aaron Raymond. When Raymond's wife, Nicole, found out about the affair and planned to divorce him, Denise colluded with Raymond to kill Nicole, which was done in the Raymond household. After the murder, the pair drove Nicole's body to an inner city area, which led to a young man named Zach Jefferson being arrested and convicted in Nicole's murder.

Eight months later (the episode's events), Patrick Jane learned about Raymond's wife and figured that Raymond was involved in the murder, prompting himself and Teresa Lisbon to investigate. After learning about Raymond and Denise's dalliance, Jane and Lisbon set them up to meet at an abandoned warehouse, with the former holding a silver briefcase that he claimed had evidence of their role in Nicole's murder. He gave them five minutes to confess, threatening to open the case if they didn't, and it was at that moment that they both gave in and confessed to the murder.

In each interrogation, however, each one pointed the finger at the other, with Denise portraying herself as a bystander who watched Raymond kill Nicole with a knife, claiming that he smiled while doing so. Denise was portrayed as a deranged villainess in Raymond's version; according to Raymond, the evil Denise killed Nicole and became a different person when she committed the murder. Though Jefferson is released, the episode ends without actual confirmation regarding which of the two physically killed Nicole. Nevertheless, both Denise and Raymond were arrested. 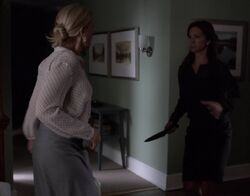 Denise charging at Nicole while brandishing a knife 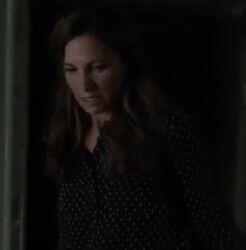 Denise's evil snarl after killing Nicole
Add a photo to this gallery
Retrieved from "https://femalevillains.fandom.com/wiki/Denise_Sparks_(The_Mentalist)?oldid=177572"
Community content is available under CC-BY-SA unless otherwise noted.