Start a Wiki
watch 01:51
The Loop (TV)
Do you like this video?
Denise Daniels was the hidden main villainess of Criminal Case: The Conspiracy, the 5th season of the crime solving game Criminal Case.

Denise was introduced in case #36, "Up in Flames", as the head of the Space and Aeronautics Research Agency (S.A.R.A), first appearing to retrieve all the data from the now defunct DreamLife, including a meteorite the corrupt company was studying.

The company was run by recurring villainess Rozetta Pierre, who was also the founder and apparent leader of a secret group known as Ad Astra, a secret society that was planning to use the meteorite to make a superhuman serum to make themselves indestructible. As the police team kept track of Ad Astra's activities, Denise appeared to serve as an ally, assuring them her agency would keep the meteorite protected.

However, unbeknownst to the Grimsborough police team, Denise had hidden ties to both Ad Astra and Rozetta: she was the true head of Ad Astra and was Rozetta's mother. Having always been obsessed with creating the perfect human being, Denise used her DNA to create Rozetta as a "test tube baby", raising Rozetta to believe herself superior to everyone else. However, when she found that Rozetta had no superhuman abilities despite her high intelligence, Denise rejected Rozetta as a failure by age ten, leaving mother and daughter estranged for years. However, later in life, Denise enlisted Rozetta to form Ad Astra as part of her plan to create her superhuman serum; playing on Rozetta's desire to earn her mother's approval.

While Ad Astra worked on their own superhuman serum, Denise worked on mutating her own DNA to use the serum to create a group of indestructible neohumans, working alongside scientist Dr. Henry Liu in creating the neohumans. While Ad Astra initially relished in the superhuman serum they were given by Denise, the villainess' true intention was to use it to kill the Ad Astra members, as the team would later realize the superpowers granted to them by the serum were also killing them. When Louis Leroux discovered Denise's secret lab containing her neohumans and attempted to warn his Ad Astra cohorts, Denise hired Felix Murray to create a power blackout to halt Louis' attempted warning text and later had imprisoned former DreamLife scientist Dr. Shweta Noorani kill Louis within prison after he was arrested for murdering Zoe Kusama.

It was after Shweta's arrest that the Grimsborough PD team learned there was a higher mastermind behind Ad Astra, with case #55, "Running Scared", having the detectives learn from homeless man Danny Williams that he'd been paid by Denise to keep an eye on Rozetta and her fellow Ad Astra members, Christian Bateman and Joe Warren. The following case, "To Eternity and Beyond", had the detectives discovering strands of Denise's hair on a brush, which Amir Devani used to determine that Denise was Rozetta's mother. When the player and David Jones confronted Denise, the villainess admitted to monitoring Ad Astra and being Rozetta's mother, but denied being the orchestrator of Ad Astra and smugly boasted that the police had no proof of her diabolical deeds.

The following case, "Reap What You Sow", had Rozetta confessing to the team via video phone call that Denise had rejected her as a child when she failed to meet her standards, as well as how she'd only come to accept her when she began using her for her plan to create her superhuman serum. The case also revealed that Denise was intent on killing Rozetta and the rest of Ad Astra for outliving their usefulness and had even attempted to bribe Trudy Lively (Christian Bateman's lawyer) into working against Christian and Ad Astra. Case #58, "Extinguished", had the Grimsborough PD team uncovering the full extent of Denise's plan: to simultaneously set off a nuclear explosion and an earthquake whose combined effects would destroy the city, leaving only herself and her neohumans as the survivors.

The penultimate case of The Conspiracy, "Eve of Disaster", had S.A.R.A lawyer Martin Davenport being unmasked as the killer of security guard Jon Benson, having killed him when he caught him extracting the meteorite core on Denise's order (having been promised by Denise a place in her new world order). After the police team convinced Rozetta and the surviving Ad Astra members to work with them to stop Denise, the player and Gloria Hayes went to question Martin in prison, who revealed that another co-conspirator of Denise's was preparing to release the core into the reactor of the Grimsborough Nuclear Plant and began to state the only way to stop the nuclear explosion. At that moment, Martin suddenly died, with Denise calling Gloria to reveal that she had killed him by frying the chip she had implanted in his brain and boast about how her plan to set off the nuclear explosion was set.

With the help of Jasper Everett, the reactor was stopped before the nuclear explosion could commence, with plant director Fiona Maris revealing that Denise forced her to place the meteorite core into the reactor under the threat of harming her family. Following Fiona's arrest, Rozetta and her fellow surviving cohorts (Joe and Julia Brine) went to confront Denise as she stormed Grimsborough with her neohuman creations, with Rozetta blasting her villainous mother for her actions. After Denise mocked her daughter and the latter's cohorts, Julia, Joe, and Rozetta unleashed their respective powers on the sociopath and her neohumans, only for Rozetta to be shocked to find her own abilities had no effect on them. After that, the evil Denise pulled out a gun and declared her only regret was having Rozetta before killing her daughter with a shot to the head. The case then ended with a neohuman tossing a grenade at Joe and Julia, with the final case of The Conspiracy, "Blaze of Glory", revealing that Julia was killed in the explosion while Joe survived.

With the neohumans now wrecking havoc on Grimsborough and killing anyone in their path, the police team began working to find Denise and put a stop to her army's destructive actions. After Cathy Turner tracked Denise to City Hall via facial recognition software, the player and David went to confront the murderous mastermind, only to find Denise's severed head impaled on a statue. The rest of her body was later found on a local hillside, where it was revealed that Denise had had her hands tied and was forced to kneel before her killer beheaded her.

In addition to uncovering that Denise had blackmailed her assistant Otto Kessel into having a sexual relationship with her, the police investigation into the villainess' death revealed that she had created her neohumans to work under a "hive mind" mentality, allowing her to force them to obey her command. Ultimately, though, it was revealed that not only had Otto killed Denise, but he was also another neohuman whom the latter trained to serve as her assistant and pose as a human. However, after developing an independent mind and growing tired of Denise's cruelty, Otto attacked and decapitated his mother on the hill with a machete so that he could take over the neohuman army and then destroy the human race as revenge. 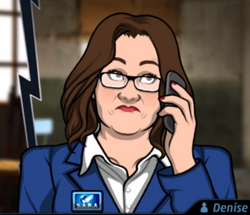 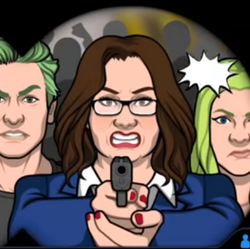 Denise pointing her gun at Rozetta
Add a photo to this gallery
Retrieved from "https://femalevillains.fandom.com/wiki/Denise_Daniels_(Criminal_Case)?oldid=169704"
Community content is available under CC-BY-SA unless otherwise noted.