Start a Wiki
watch 01:51
The Loop (TV)
Do you like this video?
Demon Princess Elzebub (Terry Liu) is the main villainess in the 1975 Sci-Fi film "Infra-Man".  In the US dubbed version, she is known as Princess Dragon Mom.

In the year 2015, Demon Princess Elzebub has awakened from 10 million years of domancy.  She plots to conquer the Earth.  She destroys a few major cities in China to prove her power to humanity, who reacts in shock.

Demon Princess Elzebub is the leader of the Ice Age Men, who appear as Skeleton Ghosts.  She has an underground base at Devil Mountain.  She sends out monsters to generally mess with humanity and also to destroy the elite chinese force that is foiling her attacks.  Elzebub's main henchwoman is Witch-Eye (Dana Shum).

The head of the Science Headquarters, Professor Liu Ying-de, has completed the BDX Project, a potential countermeasure against Elzebub. In the HQ's secret laboratory, he transforms Lei Ma, a high-ranking SH officer, into the bionic kung fu superhero Inframan. The solar-powered red & silver armored Inframan has both enhanced strength and combat weapons.

Elzebub is evenuallly killed after Infra-Man fights his way into her base and past all of her minions to destroy her in single combat.

In her monster lizard form the princess is apparently capbabl of entering the ground and causing earthquakes and disasters.  She can also fly.  As Infra-Man learns in their final confrontation she is also totally impervious to almost any harm, as he cuts her head off several times.  However, she simply regenerates a new head and lives.  He learns that she is not immune to the complete atomization of his shock gauntlets and shoots him with the solar beam. 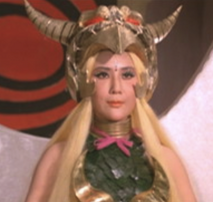 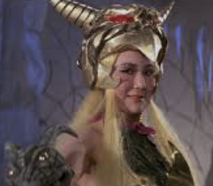 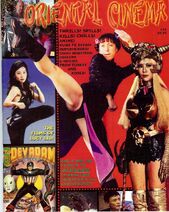 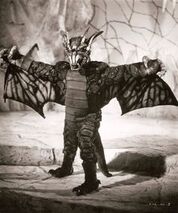 Add a photo to this gallery
Retrieved from "https://femalevillains.fandom.com/wiki/Demon_Princess_Elzebub_(Infra-Man)?oldid=198957"
Community content is available under CC-BY-SA unless otherwise noted.