Start a Wiki
watch 01:51
The Loop (TV)
Do you like this video?
Delmo Corps (デルモゲニィ), or just the Delmos (デルモ), are a female army from the anime Agent AIKa (アイカ).

They serve as an army for the show's main villain Rudolf Hagen, as well as his sister Neena Hagen. Their roles include battling the Hagen's enemies, whether that is via fist fighting or with guns, and they also operate different aspects of Rudolf's ship.

The Delmo army is made up of beautiful young women wearing incredibly short skirts and high heels that show off their long legs. There are 5 different ranks of Delmo, all of which have different roles and outfits, they are:

The highest ranking Delmos. Their uniforms consist of white tops, dark blue miniskirts and white high heels. They are the officers of the ship and ensure that the ship operates smoothly.

Their leader is an unnamed, green haired woman, she is the highest ranked member of the Delmo Army, and when both Rudolf and Neena die midway through the series she takes over as the boss, and authorises a revenge plot against Aika and her friends. She is a lesbian and is in a relationship with her second in command.

Rudolf has a good view of his army

A knocked out Delmo slumps to the floor

The White Delmos being addressed by their leader

A White Delmo in disguise, getting out of a car

Two White Delmos in disguise, walking up the stairs 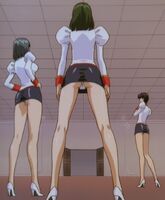 The White Delmo leader kisses her second in command

The White Delmo leader drops down on to Aika...

...and lands on her, causing Aika to suffer underneath her

The second highest ranking Delmos. Their uniforms consist of an all gold top and miniskirt combo as well as golden high heels. They are responsible for carrying out Special Ops missions.

A Golden Delmo readies her gun

...ready to end their lives
Add a photo to this gallery

The third highest ranking Delmos. Their uniforms consist of an all blue top and miniskirt combo as well as blue high heels. They are elite infantry class and carry assault rifles, their roles consist of protecting the ship from dangers as well as piloting. 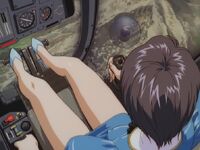 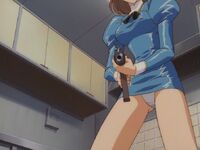 Blue Delmos running towards the action

A Blue Delmo climbing a ladder 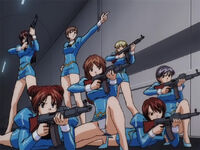 Blue Delmos preparing to attack
Add a photo to this gallery

The second lowest ranking Delmos. Their uniforms consist of an all black top and miniskirt combo, long white tights and black high heels. They are infantry class and carry out simple missions as well as ship administration. Unlike their senior blue class, they rely on battling with punches and kicks as opposed to using firearms. Most new recruits start out at this level. Failure doesn't seem to be tolerated well by their superiors, as Neena Hagen and the White Delmos are seen physically disciplining them if they fail.

A Black Delmo strikes Gust with a punch to the face 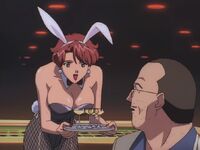 An evil Black Delmo in disguise

Black Delmos kicking bound heroes in to the water, with the intention of drowning them

A Black Delmo chokes Aika
Add a photo to this gallery

The lowest ranking Delmos. Their uniforms consist of an all pink top and miniskirt combo as well as pink high heels and a pink hat. These Delmos are never seen engaging in physical combat, they are the mechanics and engineers of the ship, and are also seen driving tanks. 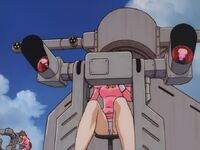 A Pink Delmo driving a tank for her golden superior
Add a photo to this gallery
Retrieved from "https://femalevillains.fandom.com/wiki/Delmo_Corps_(Agent_AIKa)?oldid=117488"
Community content is available under CC-BY-SA unless otherwise noted.