Start a Wiki
watch 01:50
The Loop (TV)
Do you like this video?
Della Martin was the hidden villainess in the 1952 comic Tim Holt #29, appearing in the story "Outlaw Gold!".

Della Martin is first seen in the episode on an open wagon galloping on a desert trail.  She is being pursued by six members of the notorious Butch Cassidy's Wild Bunch gang.  Lucky for her, Tim Holt and Chito saved her by chasing away the gangmembers with a birage of gunfire.

Later that night, Della is performing as a dance hall girl at the local bar.  After singing a number, Red Mask showed up, and Della asked him to help her get the money (close to $200,000) her father buried years ago out in the desert.  She provided Red Mask with a map, and told him that the men were pursuing her in the desert to get the map.

At first Red Mask told her she needed to get a marshall to help her.  However, after he and Della were shot at by the gang members, Red Mask promised to take her out and find the buried money.

While in the desert, another three of the members followed them.  He one by one took them out.  Della and Red Mask then set up camp for the night.

An hour after sunup, Red Mask uncovered the box with a shovel.  He was just about to retrieve it, when Della pulled out a gun.  She told him, "You've served your purpose Redmask!  You brought me to this black box!  You've driven off the Wild Bunch!  I don't need you any more Redmask!"  After shooting him, Della rode off.

However, after she rode off, Redmask got up, not dead after all.  It was revealed that he had read that Butch Cassidy had a girlfriend, and put two and two together.  He therefore, figured that the girlfriend was Della Martin.  So, while she slept he short-loaded the bullets in her gun.  With only a few grains of powder left, the bullets she fired had just enough powder to reach him.

Three hours later, Della returned.  This time Redmask was waiting for her.  Della told him that the box was empty.  Redmask told her that while she slept, he dug up the box and replaced it after taking the money.  He had gotten the truth out of the gang members he had tied up in the desert the previous day.  Della was arrested, and the money was returned to the people. 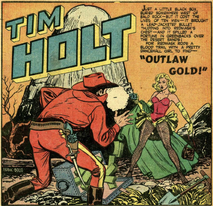 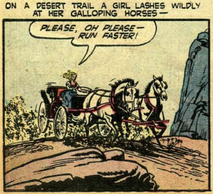 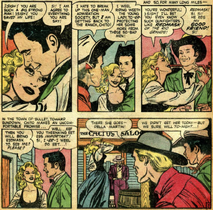 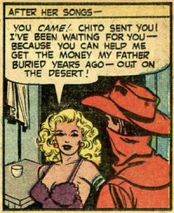 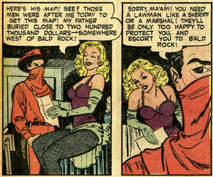 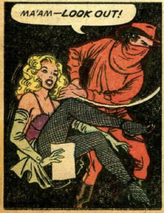 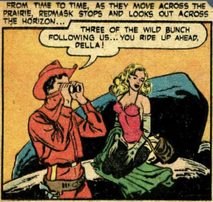 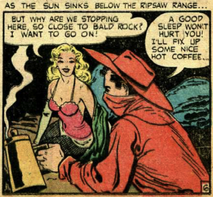 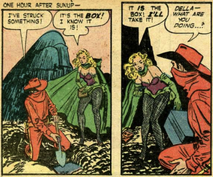 Add a photo to this gallery
Retrieved from "https://femalevillains.fandom.com/wiki/Della_Martin_(Tim_Holt)?oldid=156295"
Community content is available under CC-BY-SA unless otherwise noted.