Start a Wiki
watch 01:50
The Loop (TV)
Do you like this video?
Delilah (Susan Seaforth Hayes) is the secondary antagonist in the 1968 episode "The Night of Miguelito's Revenge" for the TV series "The Wild Wild West".

When we first see Delilah, she is posing as a lady barber in a shop that James T. West (Robert Conrad) goes in to get a shave.  After she covers his face with a hot towel, the man sitting next to him is revealed to be Dr. Miguelito Loveless (Michael Dunn), who quickly goes over to the unsuspecting West and pours a knockout liquid through the opening.

West wakes up in a peculiar circus show, where he sees several strange signs and the local judge tied up.  After fighting with several hired thugs, West is knocked out.  When he awake's, he is sitting in the barber chair and Delilah is now a much older lady.

Next we see Dr. Loveless and the lovely Delilah walking through a practice session inside the circus bigtop.  They go through a back area where there are several individual jail cells with people inside them.  Loveless gives very little information about them, but he mentions to them that they will await a trial.

Delilah is seen driving a horse drawn carriage next to a blacksmith shop, where she lets the attendant know she has been bothered by a loose seat.  When the blacksmith sits on it he notices a lever next to the seat.  When he pulls it, he is electrocuted to the point that he is knocked out.

Lastly, Delilah poses as Sadie, a lady that owns an outside flower stand.  When Mr. Pike, a local businessman (who is actually Artemus Gordon) goes to purchase a flower.  The flower has been sprayed with a knockout odor and he is kidnapped by Delilah and some other thugs.

This was the last of ten appearance for Dr. Miguelito Loveless in The Wild Wild West series, and this time his assistant was named Delilah.  Delilah has been helping Loveless kidnap people he has a grudge on based on the nursery rhyme "Monday's Child".  The rhyme goes:

The seven people relating to each day are an actress who refused to help the career of one of Loveless' friends, a ballet writer who alledgedly plagiarized on of his works, a jockey who threw a race Loveless lost money on, a judge who sentenced an accomplice to death, a financier who refused to find a scheme to shrink men in stature, a blacksmith who was foreman on his condemend friend's jury, and Jim.  Loveless considers all these people a thorn in his side, so he sets up a kangaroo court in an old circus to sentence them all to death.

West figures out who is behind it all, and goes to a night time performance at the circus.  However, he is the only customer sitting in the stands next to Loveless's goons.  Delilah and Loveless are seated next to a panel beside the firing canon.  The seven accused prisoners are revealed, and Loveless begins to hold a kangaroo court, in which none of them receive a fair hearing.  One by one they are all convicted and sentenced to death.  However, once they get to Mr. Pike (who is still actually Artemus), Artemus asks to plead his own case.  Artemus is able to turn the table.  He is able to use a mechanical butterfly to blow up and distract Loveless.

When Loveless is about to be captured, he makes his getaway by going up and into the firing cannon.  Delilah uses the control panel to fire it off, and Loveless goes shooting up through and makes a hole in the circus tent top.  When West and Gordon go out to look for him, all they find is a doll disguised to look like Loveless with audio saying "There will surely be another time gentleman, another time, another time".  Loveless is able to get away without a trace.

In the end Artemus informs West that all of his goons including Delilah were apprehended by the authorities, but Loveless was not found. 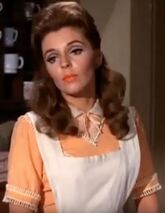 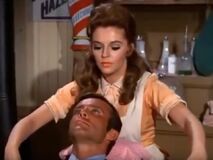 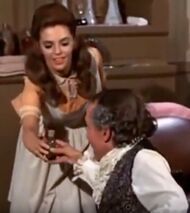 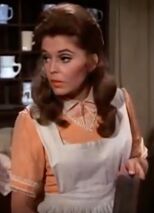 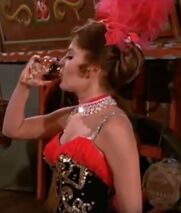 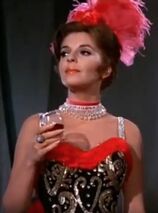 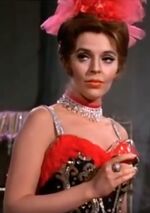 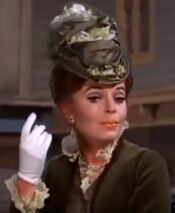 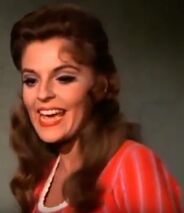 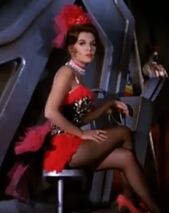 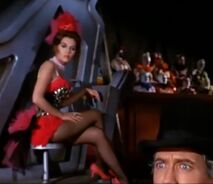 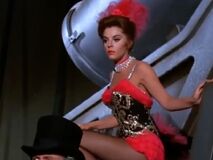 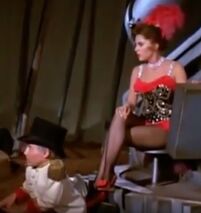 Add a photo to this gallery
Retrieved from "https://femalevillains.fandom.com/wiki/Delilah_(The_Wild_Wild_West)?oldid=186878"
Community content is available under CC-BY-SA unless otherwise noted.