Start a Wiki
watch 01:51
The Loop (TV)
Do you like this video?
Deimata (Tracy Dawson) is the main antagonist in the 2012 Disney Channel film "Girl vs. Monster".

Skylar Lewis (Olivia Holt), the main character was told to stay home on Halloween while her parents were gone.  She attempted to sneak out of the house by cutting the power so the alarm wouldn't go off.  However, that act ended up unleashing a monster called Deimata, who had been contained in her parents hunting unit.  As Skylar learns later, her parents have been keeping a big secret, that they have been monster hunters.  Not only that, but Skylar is a fifth generation of hunters.

Deimata was one of the Ancient ones, which makes her an immortal and super powerful monster.   She is capable of teleporting anywhere, flying in a red smoke form, making herself invisible, possessing other bodies, moving objects, increasing and decreasing her physical size, manipulating her voice, growing tentacles from her face, multiplying her head, and shooting green balls of energy out of her fingers.

With Deimata released, it is up to Skylar and her friends Sadie (Kerris Dorsey) and Henry (Brendan Meyer) to go fight her.  They head armed with Skylar's parents' monster hunting tools to a party at the McQuerry Mansion.  However, Henry becomes frozen in fear, and Skylar's parents assistant Cobb (Adam Chambers), comes and takes him back home to fix him.

Meanwhile, Deimata lures Skylar's parents into a trap by pretending that Skylar was in trouble.  After this, Myra, Skylar's rival, is possessed by and transformed into Deimata.  The possessed Myra Santelli (Katherine McNamara) then goes to the party where she publicly insults Skylar for being nervous to sing at Ryan's party.  Skylar runs out in embarrassment.  A possessed Myra sings in Skylar's place, and falls downstairs after Deimata leaves her body.

Deimata then possesses Ryan Dean (Luke Benward) to discourage Skylar from facing her fears.  However, Ryan breaks free by facing his fear, asking Skylar out.  Skylar then faces her fears by singing in front of everybody, while Ryan and his band performs as well.  While Skylar sings, all the monsters vanish and Sadie also gathers the courage to stand up to her monster Theodosia by spelling the things she couldn't when she was a little girl.  When all the monsters are all vanquished, Deimata comes and reveals she cannot be destroyed that way.  She then reminds Skylar that she still has Skylar's parents in captivity, and Skylar rushes off to find them.

Skylar and her friends try to fight off Deimata, but she doesn't seem able to be stopped.  Although Skylar has overcome her fear, she soon realizes Deimata is still feeding off of her parents' fears, about Skylar's safety.  Once Skylar gets her parents to trust her, Deimata is weakened and the three friends defeat her and capture her.

In the post-credits, Deimata blows on the glass in the hunting unit, cracking it and we hear it break as Deimata's laugh is heard one last time, hinting at a sequel. 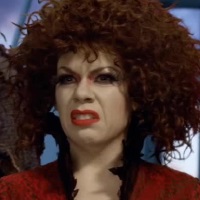 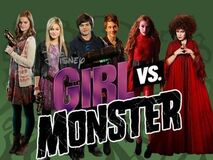 Add a photo to this gallery
Retrieved from "https://femalevillains.fandom.com/wiki/Deimata_(Girl_vs._Monster)?oldid=187622"
Community content is available under CC-BY-SA unless otherwise noted.