Debbie Morbach is a nurse who was part of the crew who performed an implant enlargement procedure on Sara Foster, with the procedure taking place a week prior to the events. Sara was in a boating accident that caused one of the implants to rupture and leak fluid into her system, hence her need for surgery. The crew was unaware of the leak until Sara went into hemorrhagic shock, and afterwards, Debbie was supposed to place an IV of epinephrine into Sara. However, Debbie inserted it incorrectly, leading to the chemical entering her heart and killing her.

Sara's widower, Brad Foster, filed a lawsuit against the doctors, which also included plastic surgeon Keith Winters and anesthesiologist Carlos Garza, accusing them of killing Sara (while unaware of the boating accident until the end of the episode). In the episode's events, Garza planned to tell the truth about everything, which upset Winters and Debbie when they confronted him about the suit. However, as revealed later on, Debbie was angry for a different reason: she had been in a year-long relationship with Garza, and she found out that he was sleeping around with their patients. After Winters left Garza's home, Debbie returned and confronted Garza after seeing a cigarette with lipstick on it, which revealed that his dalliances continued. After being blown off by Garza, Debbie turned heel by strangling Garza to death with a curtain cord.

After killing Garza, the evil Debbie staged Garza's death as a suicide; rolling up Garza's body and then hanging him from the ceiling. Garza was portrayed as having killed himself out of guilt for what occurred with Sara Foster, but after it was uncovered as a murder, Winters was suspected due to the lawsuit, while Debbie attempted to blame Winters for Sara's implant being nicked after she was revealed in the IV mishap. Female DNA on the rope ended up revealing Debbie as the killer, with Horatio Caine and Yelena Salas believing that the villainess killed him to because he was coming clean about Sara. It was during this point that Debbie revealed her true motive--her relationship with Garza--and afterwards, Debbie voiced her anger at Garza for sleeping with their patients despite promising that he wouldn't. The villainess also lashed out at Winters for not noticing their relationship, and she accused Garza of leaving her behind for the women she helped make beautiful, after which Debbie was arrested (off-screen) for killing Garza. 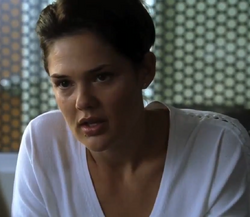 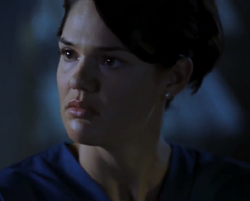 Debbie during her reveal
Add a photo to this gallery
Retrieved from "https://femalevillains.fandom.com/wiki/Debbie_Morbach_(CSI:_Miami)?oldid=146564"
Community content is available under CC-BY-SA unless otherwise noted.