Debbie Addams (née Jellinsky) is the main villainess in the 1993 movie Addams Family Values. She is played by the actress Joan Cusack.

Debbie first appears when she starts working as a nanny taking care of the three Addams children, Wednesday, Pugsley and Baby Pubert. Very early in the movie, we learn that she is, in fact, the infamous “Black Widow” serial killer, who has in the past used many disguises to get close to wealthy bachelors, only to kill them after the wedding and run off with the inheritance.

“Debbie” (the name might not be her own, as she operates under a false identity) has set her greedy eye on Fester Addams (played by Christopher Lloyd). As Wednesday is about to discover the evil nanny’s true identity, she talks the parents into sending the children to summer camp. Fester, who has fallen in love with her at first sight, soon proposes marriage and the wedding is celebrated at the Addams estate. Losing no time, Debbie tries to kill Fester during their honeymoon, but fails. She gets increasingly impatient, especially because Fester wants to consummate their marriage. Pretending to be a virgin, Debbie refuses, because she finds him repulsive (which he is). Eventually, she cedes in exchange for Fester’s promise never to see his family again, to which her husband reluctantly agrees. She repeatedly uses her sex appeal to make him stand by his decision. After moving to a grand manor, Debbie’s plan is to kill Fester on their anniversary by hiding a bomb inside a gift package. The bomb explodes and destroys the house, but Fester escapes unscathed. Furious, Debbie confronts her husband by pulling a gun and declaring that she never loved him. Again, Debbie’s plan is thwarted, this time by Thing who runs her over with the car. Fester and Thing escape to the Addams mansion. As the family reunites, Debbie appears armed with a shotgun, now determined to execute all her inlaws.

After fastening all the Addams family members to electric chairs, Debbie uses a slide show to explain that she has killed her parents and previous husbands out of greed and selfishness. She ignores Fester’s plea to kill him, but let the rest of the family go. As the evil Debbie throws the switch to electrocute everyone, little Pubert appears and holds two wires together. This reverses the current into the opposite direction. Debbie is so startled that she forgets to let go of the lever, and therefore she now gets electrocuted herself. The charge makes her take off the ground, and we repeatedly see an agonizing Debbie who gets a hefty taste of her own medicine. The saved Addams family watches in relief and delight as the electrocuted villainess slowly disintegrates into dust. In the end, nothing more remains of her than a heap of ashes, complete with her high heels, jewellery and credit cards. Debbie’s remains are buried on the Addams family cemetery.

At the end of the movie, Wednesday and her new boyfriend Joel stop by Debbie's headstone. Even though Debbie had tried to kill her, the morbid Wednesday expresses admiration for her dead aunt's homicidal ambitions, but concludes that she just didn't have it in her to be a competent murderess. Then, as Joel bends over Debbie's grave with a flower, a hand emerges from the ground and grabs him, suggesting that Debbie will rise again. However its obviously A harmless prank wednsday did on joel by having thing disguise himself as debbies hand since her while body was disintegrated into dust particles Which also included both of her hands. 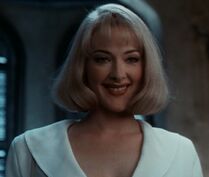 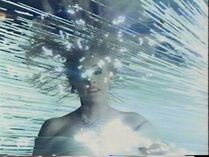 Add a photo to this gallery
Retrieved from "https://femalevillains.fandom.com/wiki/Debbie_Addams_n%C3%A9e_Jellinsky_(Addams_Family_Values)?oldid=191523"
Community content is available under CC-BY-SA unless otherwise noted.