The Female Villains Wiki
Register
Don't have an account?
Sign In
Advertisement
in: 1980s, Brunette, Live Action Villainess,
and 4 more

DeJager (Friday the 13th: The Series)

DeJager (Donna Goodhand) is a villainess from Friday the 13th: The Series, appearing in Season Two's "A Friend to the End" (airdate April 17, 1989)

DeJager is an artist who was in possession of the Shard of Medusa, named after the infamous Gorgon who turned people into stone with a single gaze. She would have her female models hold the shard while she created a sketch of her subject, which is what she was doing early in the episode. After her victim was weakened by the shard, DeJager killed her with the object, turning the woman into a stone statue, and also establishing DeJager's heel persona.

While this was going on, Ryan was attempting to regain the Shard of Medusa, but DeJager committed her evil act and got away before he could. Micki entered DeJager's studio as a model and managed to retrieve the shard and passed it to Ryan. However, the evil DeJager was let into Curious Goods by Ryan and Micki's young nephew, J.B., and she threatened his life (by holding a chisel close to J.B.'s neck) unless she had the shard back in her possession. Ryan and Micki gave the object back to DeJager, and she escaped. It was never revealed whether or not Ryan and Micki regained the Shard of Medusa.

DeJager using the Shard of Medusa on her victim 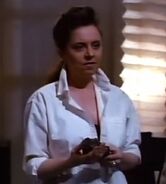 DeJager with the Shard of Medusa 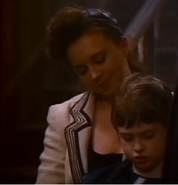