Start a Wiki
watch 01:39
The Loop (TV)
Do you like this video?
The Dazzlings (Kazumi Evans, Diana Kaarina and Maryke Hendrikse) are the main antagonists of My Little Pony Equestria Girls: Rainbow Rocks. They are a musical group of magical Sirens, consisting of Adagio Dazzle, Aria Blaze, and Sonata Dusk. Adagio is the leader and Aria and Sonata are the comic reliefs.

The three Sirens were once powerful threats to Equestria itself, sowing chaos with their enchanted voices and growing ever more powerful from feasting on negative emotions. Unable to defeat them, the great mage Starswirl the Bearded resorted to banishing them to another dimension, where magic was nonexistent and their power was nullified, or at least reduced to nothing but a pale shadow of what it once had been.

The three sirens are first seen in a city cafe, where they are observed absorbing negative energy from the customers there, complaining about the miserly amounts of power they gain from this. Then they witness the Harmony blast that defeated Sunset Shimmer in the previous movie. They realize that magic has been brought into the Human World (due to Sunset Shimmer's theft of the Element of Magic), and that their own power has returned as a result. Now once again in possession of their magical abilities, they decide to take over the Human World, starting with Canterlot High, the source of the magic.

The arrive in Canterlot High and Sunset Shimmer gives them a tour around the school, but she feels a bad vibe from them and notices that Adagio stops her from touching her crystal necklace. In the cafeteria, they sing a song that ignites the students' competitive spirits, turning a planned friendly singing festival into a Battle of the Bands. They also manipulate Principals Celestia and Luna into bending to their will.

Twilight discovers the true nature of the Dazzlings, but when she and the rest of the human Six attempt to defeat them, they realize that they are not able to unleash the Elements of Harmony at will. Instead, their failed attempt plays right into the Dazzlings' hands. The sirens realize that this group of students were not under their control and deduce that they must have great magic in them - and thus, great power to absorb, though they would have to turn them against each other without the use of their own magic first. This turns the Rainbooms into priority targets for the Dazzlings. In the meantime, they continue gathering energy from the other students.

When they see Sunset Shimmer again, they threateningly play with her emotions and intimidates her, claiming that "no one is going to remember her when they win". Feeling that simply getting the Rainbooms eliminated might not do the trick, the Sirens arrange that they pass to the finals instead despite a lackluster performance. This causes resentment in their opponent Trixie, who refuses to accept this. The Dazzlings then trick Trixie into removing the Rainbooms from the competition altogether by trapping them in a locked basement. However, thanks to Spike, the Rainbooms managed to escape.

Just as they are about to devour the combined energy of the students, the Rainbooms appear to stop them. In turn, the Sirens summon astral projections of their true forms for the battle. The Six overwhelm Aria and Sonata at first, but Adagio's powerful sonic waves throw the girls off-balance, allowing the Dazzlings to gain the upper hand. With the Rainbooms down for the count, Sunset Shimmer steps in to help them out and the students begin to sing along with them. The Dazzlings appear shocked as Sunset's magic, combined with that of the Six, unleashes a giant rainbow alicorn that destroys their crystal necklaces, resulting in them losing their magical voices forever. The students boo at the defeated Dazzlings' horribly off-key final attempt to sing and throw vegetables at them, forcing them to flee the stage, never to be seen again.

The Sirens' magic lies in their enchanted necklaces, which contain the power of their true forms. Their main ability is to subtly manipulate or directly control others via their enchanted compelling voice. As they grow more powerful by feeding on negative emotions, they usually use this ability to sow chaos among their victims. The more negativity they absorb, the more compelling their voice grows, and at the apex of their power they could potentially subjugate an entire world. However, they are not able to subjugate the Elements of Harmony magically.

When forced into direct combat, the Sirens use their necklaces to summon ethereal projections of their true forms. Those apparitions are able to use their voice offensively, unleashing powerful shockwaves with an ethereal wail.

Despite their magical powers that force others to do their bidding, they are (especially Adagio Dazzle) also skilled manipulators of their own right, who can turn those they cannot control against each other with trickery, deceit and the actions of those they can control.

Their main weakness was the pendants themselves. Once they were destroyed, the Dazzlings lose their singing powers and talents. 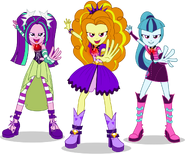 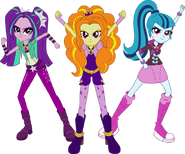 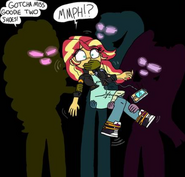 Add a photo to this gallery
Retrieved from "https://femalevillains.fandom.com/wiki/Dazzlings_(My_Little_Pony:_Equestria_Girls_-_Rainbow_Rocks)?oldid=191565"
Community content is available under CC-BY-SA unless otherwise noted.