Start a Wiki
watch 01:51
The Loop (TV)
Do you like this video?
Dawn Wilder (Nancy McKeon) is the hidden main villainess from "New Dawn," episode 6.07 of The Hitchhiker (airdate November 2, 1990). She is the wife of Ken Wilder, a former lawyer turned artist.

As the episode's progression revealed, Ken and Dawn's marriage wasn't a happy one, as Ken was a habitual adulterer. Among his lovers was Mimi Rasmussen (who runs an art gallery), and his current illicit fling was with one of the models, Sherri. All the while, Dawn acted as a supporting wife regarding Ken's career change, showing her support in the episode's beginning.

In actuality, Dawn turned heel and began killing Ken's lovers, as she had found out about Ken's dalliances and went into a rage. Her first victim with a woman named Carolyn, who she stabbed to death after placing a plastic bag around her head. The body was found on top of a tree during a gathering at the art gallery, and later on, Dawn was being stalked by an apparent intruder. The deranged villainess later killed Mimi, placing a bag around her head before plunging a knife into her; the same method she used on Carolyn. She acted shocked to see Mimi's body, and went to find Ken, only to find him with Sherri.

In a twist, Dawn's "intruder" was revealed as Ken, who later found Dawn deceased on the beach. Ken revealed to Sherri that he attempted to scare Dawn away so he could leave her, and he was actually suspected in Dawn's murder. However, in the episode's climax, Ken walked up to Dawn's body after hearing a noise, and it was at that moment that Dawn rose up and struck Ken with a rock before taking out the knife and killing Sherri. Afterwards, Dawn claimed to have knocked out the actual killer to police, but once she entered the ambulance with Ken (who survived the attack), the evil Dawn confessed to killing his lovers, using his knife in Sherri's murder while burying the one used in the previous killings. The episode ended with Dawn informing Ken that no one would come between them again, adding that she would take "really good care" of her husband. 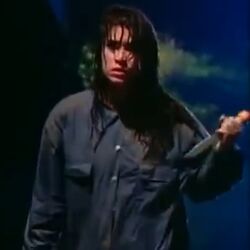 Dawn's reveal as a murderess 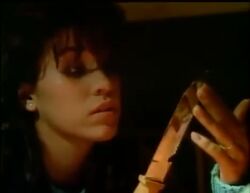 Retrieved from "https://femalevillains.fandom.com/wiki/Dawn_Wilder_(The_Hitchhiker)?oldid=171032"
Community content is available under CC-BY-SA unless otherwise noted.