Dawn Sterling's backstory revealed that she was born Mary Ann White in Atlanta. In 1990, Mary Ann was arrested for cocaine possession, and in the following year, she was arrested for her work as a prostitute. It was in 1991 that Mary Ann changed her name to Dawn, and she later married James Sterling, the leader of the New Promise Church, which (among other things) preached against homosexuality.

The beginning of the episode showed Dawn and James encountering openly gay actor Jeff Cantwell, who had knowledge of James' homosexual affairs and planned to out him as a hypocrite and fraud. According to Scott Jepsen, Dawn snarled that she wasn't going to allow Cantwell to ruin her church, and after her vow, the evil Dawn drove to Cantwell's apartment, where she shot and killed him--staging the murder to look like a suicide committed by a troubled man conflicted over his sexual orientation. James ended up arrested for the murder, after which he revealed that he spent an immense amount of time trying to "save" him (possibly suggesting that Cantwell was another lover), but after denying the claims of murder, James committed suicide in his cell, leaving a note which had him taking the fall for Dawn.

Dawn continued to paint her deceased husband as Cantwell's killer, but after her criminal past was uncovered by McCoy and Rubirosa, the former of the two offered Dawn a plea deal: second-degree murder for a 15 year sentence. Dawn originally turned it down, but after being reminded that she'll face immense scrutiny from the church regarding her past as a prostitute, Dawn took the deal, claiming that all she cared about was the church. 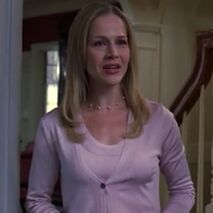 Add a photo to this gallery
Retrieved from "https://femalevillains.fandom.com/wiki/Dawn_Sterling_(Law_%26_Order)?oldid=188676"
Community content is available under CC-BY-SA unless otherwise noted.