Dasha Fedorovich is the Soviet Union's central logistics and communications management officer to the top Soviet leaders and commanders.

Dasha was one of ten-children born into a poor Russian family, all of whom joined the Soviet military.  Dasha was noted to be particularly talented to the point that Premier Cherdenko himself recognized and she eventually became a vital member of the Soviet intelligence.

In the canonical Allies ending, she kept her life and freedom. In the Japanese victory she would have been killed either by the Shogun Executioner in its rampage or by Emperor's agents, just for being a Soviet officer. However, it is implied that she was captured and plotted to form a Soviet resistance secretly since she wasn't seen or heard of when Kremlin came crumbling.

Dasha has allies in the Soviet military including Zhana Agonskaya (Vanessa Branch) who is a Soviet Air Force general, and Natasha Volkova (Gina Carano) who is a military sniper. 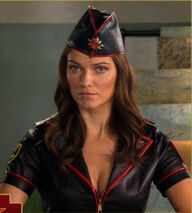 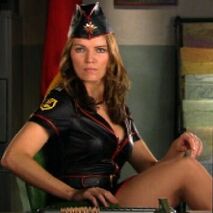 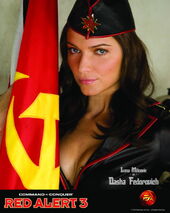 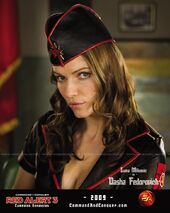 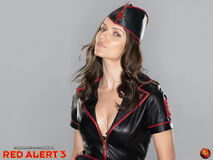 Add a photo to this gallery
Retrieved from "https://femalevillains.fandom.com/wiki/Dasha_Fedorovich_(Command_%26_Conquer:_Red_Alert_3)?oldid=194849"
Community content is available under CC-BY-SA unless otherwise noted.