Eiza González is Monica "Darling" Castello, one of Doc's gang of bank robbers, Buddy’s lawless and scandalous wife and partner in crime. The crew consists of easy-going Buddy, Darling, and trigger-happy Bats, who takes an immediate dislike to Baby. Darling is constantly seen kissing Buddy and their relationship a nod to Bonnie and Clyde. González describes her as a "weapon, and her boyfriend Buddy as the trigger."

While the crew attempts to purchase illegal arms for the job, Bats recognizes one of the dealers as a policeman and opens fire. They kill all of the dealers. Afterward, Bats makes Baby stop at Debora's diner, unaware of Baby and Debora's romance. At the diner, Darling makes a speech regarding how crazy Buddy is and the consequences that arise when he is angry. Bats dismisses her speech as phony and Oscar worthy before applauding sarcastically. Baby, aware of Bats' homicidal habit, stops Bats from killing her to avoid paying.

Their boss is furious, revealing that the dealers were dirty cops on his payroll. He decides to cancel the heist, but Bats, Buddy and Darling disagree. Doc lets Baby decide; he chooses to go through with it.

During the heist, Bats kills a security guard. Disgusted, Baby refuses to drive away, causing Bats to hit him. Baby then rams the car into a rebar which impales Bats, killing him. The three flee on foot in a possible reference to Heat. After the police kill Darling in a shootout, Buddy blames Baby for her death and vows to kill him. 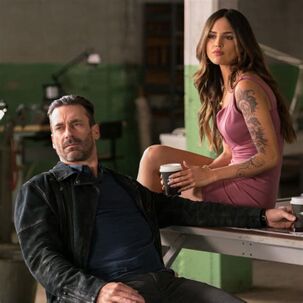 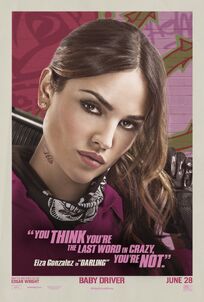 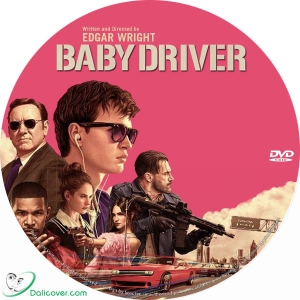 Add a photo to this gallery
Retrieved from "https://femalevillains.fandom.com/wiki/Darling_(Baby_Driver)?oldid=142993"
Community content is available under CC-BY-SA unless otherwise noted.