Darla McKendrick (Anya Monzikova) was a villainess from "Something Like Murder," episode 1.04 of Femme Fatales (airdate May 27, 2011). She is the wife of wealthy Charles McKendrick, whose vast fortune served as Darla's main motivation for her marriage.

Later in the episode, Darla encountered masseuse Beth Odets in her home, and during the treatment, Darla vented over her marriage and not being in love with her husband. What started as a massage turned into a passionate sexual encounter between Beth and Darla, and following their tryst, Darla decided to collude with Beth in a plot to kill Charles. Late one night, Charles woke up Darla regarding sounds of an intruder in the area, which led to Charles (with gun in hand) confronting the intruder (Beth), who was digging a shallow grave. At that moment, Darla turned heel and struck her husband on the head with a shovel, killing him instantly.

Following Charles' murder, Darla and Beth planned to cover their tracks by claiming Charles was held for ransom, and later involved Beth's Australian boyfriend, Howard, in the plan by having him have sex with Darla and beat her to appear that the "grieving widow" was raped. Darla was shown leaving a $10 million "ransom," but the purse was revealed to be empty, as the villainess hid the actual money in a discreet location.

In the episode's climax, Darla met with Beth regarding the $10 million; a meeting that became heated when Beth pointed a gun at Darla. She was later shot by Howard, who revealed that Beth was sleeping with Charles and that prompted her to mastermind their scheme. When Darla went to retrieve the money, she noticed it had disappeared and she accused Howard of taking it. She later shot Howard, while demanding him to tell her where the money was. Howard stated that he didn't know, which led to Darla shooting him again, this time killing him. Shortly after killing Howard, Darla was shot by an unknown assailant (revealed as housekeeper Elena Machado), and afterwards, both Darla and Beth were crawling for the former's gun, only for both of them to die laying next to each other. 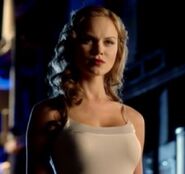 Add a photo to this gallery
Retrieved from "https://femalevillains.fandom.com/wiki/Darla_McKendrick_(Femme_Fatales)?oldid=208279"
Community content is available under CC-BY-SA unless otherwise noted.