Darby Stone is the elder of two children of widowed Julia Stone, with her only sibling being an infant sister, Beth. Some time before the episode's events, Julia heard Beth crying late one night, and after two failed attempts to get Beth to sleep, Darby went upstairs under the guise of attempting to do the same. Darby turned heel by stabbing her baby sister to death; all the while, Julia noticed that Beth's crying had stopped and went upstairs, only to see that Darby had killed Beth. Darby was shown clutching a knife and was covered in her sister's blood, while also displaying a cold and emotionless expression. Instead of reporting her, Julia destroyed the evidence and had Darby committed to a mental institution with hopes that she would receive the help that she needed, doing so because she feared losing the only remaining family she had.

However, in the episode's events, Darby decided to devise an evil plan to get herself released from the institution, with the first part of her plan beginning with killing fellow patient Renee Caldwell, doing so by beating her to death with a ball-peen hammer in the shower. The murder was committed to lure any police to the institution, and once Megan Hunt and Tommy Sullivan arrived, the evil Darby began her manipulation. She painted herself as an innocent young woman and informed Megan and Tommy that Renee was killed by mistake and she was the actual target. Darby depicted Julia as a twisted villainess; claiming that she witnessed her mother killing Beth and that she had her committed to keep her quiet. She also claimed that Julia was conspiring with Dr. Derrick Malcolm, the head psychiatrist, to have her killed due to Malcolm's inability to control her.

After a visit to Julia revealed that Malcolm was going to subject Darby to electroshock therapy, Megan protests the action. During the procedure, Darby assaulted Malcolm and escaped to Megan's house, where she met Megan's daughter, Lacey; after which, Darby told her twisted version of the events of Beth's murder. As shown via a flashback, Darby claimed that she went upstairs after Beth's crying stopped, and screamed after seeing that Julia had killed Beth, with Julia holding the knife and giving a cold expression as part of her heel persona in the scene. Darby also claimed that she got rid of the bloody clothes, but not the necklace she had on. The necklace was later found and had Beth's blood on it, leading to Julia being taken into custody. Once there, Julia revealed the truth about what happened: Darby actually killed Beth, and she covered for her teenage daughter, because she was all she had left.

Not only was Darby revealed as her sister's killer, but a substance from the institution's heat vent also revealed Darby as Renee's killer as well. Megan was driving Darby to her aunt's house when she received the news from Tommy, and she attempted to keep the truth hidden from Darby. However, Darby figured out that Megan knew the truth, and she jumped out of the moving car and ran towards a policeman with claims that Megan abducted her. Later on, the twisted villainess stabbed the policeman (non-fatally) with a knife, but Megan managed to hold Darby at gunpoint, leading to her arrest. During interrogation, Darby boldly admitted to killing Beth, who she referred to as a whiny brat, and lambasted her mother for committing her. She also boasted about how she manipulated Megan, who informed the sinister sociopath that she would be going away for a long time. 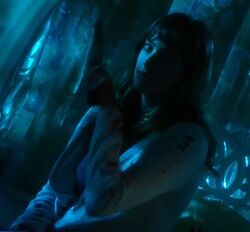 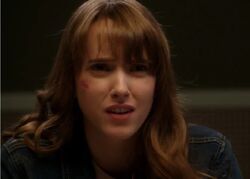 Darby during her reveal and interrogation
Add a photo to this gallery
Retrieved from "https://femalevillains.fandom.com/wiki/Darby_Stone_(Body_of_Proof)?oldid=131740"
Community content is available under CC-BY-SA unless otherwise noted.