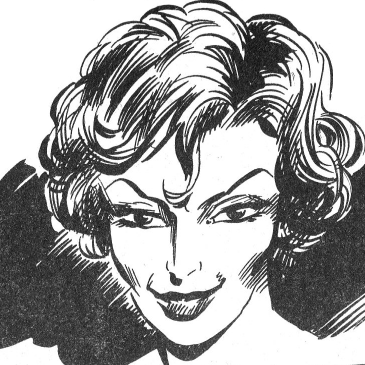 Daphné was the boss of an employee, protagonist Yvette, who she is very sexually attracted to. After discovering that Yvette pocketed some company money, Daphné takes this opportunity to blackmail the girl. Yvette swears that she only took the money because she was in need of it and that she was planning to pay it all back, but Daphné retorts that "a judge wouldn't see things that way" and makes her employee perform (and receive) sexual favors.

Eventually, Daphné decides to take things a step further and informs Yvette that she will be coming over to her apartment. When she answers the door, Yvette is shocked to find not only her boss standing there, but Daphné's husband, Gerard, as well. The perverted couple immediately tear off Yvette's clothes and begin to rape her. Meanwhile, five priests had been performing a sacrificial ritual beneath the apartment building to summon their evil god, Keeialhan. When the demonic deity, he kills nearly everyone within - including Daphné, who is mercilessly ripped in half by Keeialhan's tentacles.

Retrieved from "https://femalevillains.fandom.com/wiki/Daphn%C3%A9_Ducreux_(Storie_Viola)?oldid=206835"
Community content is available under CC-BY-SA unless otherwise noted.