Start a Wiki
watch 00:17
The Loop (TV)
Do you like this video?
Danielle Hanson (Geri-Nikole Love) is a villainess from the 2018 Lifetime film, Left for Dead (airdate October 19, 2018). She is the lover/accomplice of Justin Elliott.

The couple were co-conspirators with main antagonist Dean Chism, who planned to kill his wife, Leah (the main protagonist) for the insurance money and as revenge for testfying against him when he was accused of money laundering. The beginning of the film showed Justin and Danielle attempting to kill Leah, who was in her car with her daughter, Sammy, doing so by placing Leah in a different car and setting it on fire. The couple took Sammy, but Leah ended up surviving the attempt, only to be left with amnesia.

With Sammy as their hostage, Danielle agreed to Justin's plan to use her to extort money from Dean, originally demanding $100,000 at first, though Justin later demanded double. In addition, the evil Danielle revealed her criminal past to Sammy, as Leah's car was the 13th she hijacked. The slow return of Leah's memory derailed the couple's plans, leaving Justin to plan their escape and even resort to considering killing Sammy. Danielle objected greatly to harming Sammy, but agreed to escape with her criminal boyfriend, only to be left behind by Justin. In the film's climax, Danielle was shown encountered by Justin, who happily revealed that he got the payment after giving Sammy back to Dean, At that moment, police arrived and arrested the couple, with the insinuation that Danielle turned in herself and Justin. 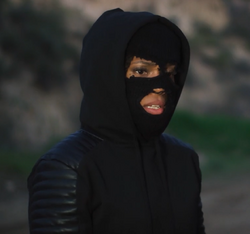 Danielle in her masked disguise 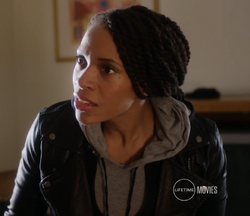 Add a photo to this gallery
Retrieved from "https://femalevillains.fandom.com/wiki/Danielle_Hanson_(Left_for_Dead)?oldid=125498"
Community content is available under CC-BY-SA unless otherwise noted.