Dana's brief backstory revealed that she was obese and suffered from polycystic ovary syndrome as a child, leading her to develop severe depression and an obsessive habit of chewing on her nails. In seventh grade, Dana met and fell in love with Ryan Becker, even going on a date with him to a dance. In adulthood, Dana moved in with her younger sister Nicole and began working with her at the flower shop Nicole inherited from their late mother, where Ryan (now Nicole's boyfriend) also worked as a wedding photographer. Dana's reunion with her childhood crush sparked a romantic obsession with Ryan, to the point where she envisioned an elaborate fantasy where she and Ryan were married and made a wedding registry in their names.

Dana's infatuation with Ryan became murderous, as she began seeing the brides-to-be that Ryan encountered through his work as threats to their "relationship". With that, Dana began killing the women to keep them from (in her mind) stealing Ryan from her, with her first two victims being Brandy Greene and Ashley Wilcox; killing Brandy by bludgeoning her to death and Ashley by strangling her with a wedding sash after biting off her fingernails. Throughout her murders, Dana would see a hallucination of Ryan, who encouraged her in her killing spree.

The episode's opening showed Dana (her identity obscured by her hooded disguise) targetting Madison Mills after seeing her invite Ryan to her bachelorette party, knocking her out after she gets locked out of the bar and carrying her away. Later on, Dana was teasingly photographed by Ryan before he and Nicole left to get coffee, with Dana biting her nails before her fantasized version of Ryan stated that his relationship with Nicole was an act to be close to her. "Ryan" then reminded Dana about what she had to do about the "real threat", after which Dana closed the store before going down to the shop's basement, where she had Madison gagged and strapped down to a table. While Dana showed hesistance to kill Madison, she was eventually goaded into the act by her hallucination of Ryan, strangling Madison to death with another wedding sash and writing "Slut" on her forehead in lipstick before leaving her body in the park, with the sash wrapped around her head like her previous murders.

Madison's murder led the BAU investigators realizing their culprit was a woman, and as the team continued their investigation, Dana was approached by Nicole with concern about her recent reclusive behavior, with Dana assuring Nicole that she was fine before eagerly accepting when Nicole revealed that Ryan invited them both to a restaurant for a special dinner. While getting ready, Nicole told "Ryan" that she was tired of hiding their love, to which the hallucination stated that they would tell Nicole about their relationship. At dinner, however, Dana was dismayed when Ryan instead proposed to Nicole, who accepted.

Nicole's engagement led the BAU onto Dana's trail, who armed herself with a knife to confront Ryan about his proposal to Nicole. But before she could, she was stopped by her hallucination, who she accused of lying to her before he convinced her that Nicole had tricked him like her past victims. Ryan then told Dana that she would have to kill Nicole, and while Dana was initially against killing her sister, she was convinced to do so by her hallucination telling her to do it for their "love". Penelope Garcia's research eventually uncovered Dana and the registry she set up for her and Ryan, exposing her as the killer when the BAU stormed the flower shop and saw the table in the basement where Dana had restrained her victims.

As the BAU began their search for Dana, the deranged villainess confronted Nicole in their greenhouse, proclaiming she couldn't marry Ryan and blasting her for (in her mind) trying to steal him from her. As a frightened Nicole began trying to call Ryan, the evil Dana knocked her sister out with a shovel before restraining her to a pole. When Nicole awoke, she saw Dana wearing a wedding dress, delusionally claiming she and Ryan were in love and getting married while chiding Nicole for not staying away from him. Nicole's attempts to convince Dana that Ryan loved her like a sister and that they had only dated briefly in middle school were rejected by Dana, with her hallucination of Ryan convincing her that she was lying when Nicole attempted to dissuade her psychotic sister. Ryan arrived shortly afterwards in response to the text Nicole sent before being knocked out by Dana, with the appearance of the real Ryan destroying Dana's delusion and driving her to hold Nicole at knifepoint, threatening to kill her if Ryan came closer.

As the BAU approached, Ryan asked Dana for an explanation to her actions, with Dana proclaiming that Ryan told her she had to kill her victims so they could be together. It was then that the BAU agents stormed in and held Dana at gunpoint, later urging Nicole and Ryan to play along with Dana's delusions to calm her down. After being convinced by Tara Lewis that hurting Nicole wouldn't take away her sadness, Dana held her weapon against her own throat, with Ryan stopping Dana from killing herself by stating that he loved her. Happy at the belief that she and Ryan could finally be together, Dana dropped her knife and hugged Ryan, allowing Aaron Hotchner and Tara to led Dana away into custody. 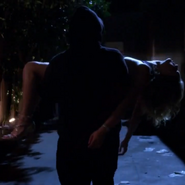 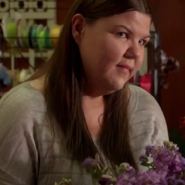 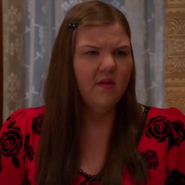 Add a photo to this gallery
Retrieved from "https://femalevillains.fandom.com/wiki/Dana_Seavers_(Criminal_Minds)?oldid=198193"
Community content is available under CC-BY-SA unless otherwise noted.