Start a Wiki
watch 01:38
The Loop (TV)
Do you like this video?
Dana Edson (Laura Vandervoort) is the recurring main villainess from Seasons Two and Three of Private Eyes.

Dana was introduced in the second season finale, "Shadow of a Doubt" (airdate July 29, 2018), as an employee at Summit Tech Industries. She first appeared inside the Everett/Shade office, looking to meet with Angie Everett and Matt Shade. During their meeting, Dana stated that she had been sexually harassed by her boss, Ray West, claiming that West had a file that included suggestive photos of her. This led to Angie, Matt, and Zoe Chow entering Summit Tech, with the plan to copy West's key card. Though that part is done, they couldn't finish their mission, and later in the episode, Dana encountered Angie and asked her to get the hard drive, while stating that her father was ill and that it was up to them as women to stick together.

Angie managed to get back into the building posing as a maintenance worker and obtained the file, which Dana informed her was known as Project Marigold. The episode's climax featured Angie giving Dana the file, but meanwhile, Matt phoned Zoe about Dana after Dominick Chambers, an old friend of Matt's, mentioned his case regarding Dana's photos. Zoe's search revealed that no such person named Dominick Chambers existed, and his claim that he was the brother of hockey player Dan Chambers was false, as Dan had a sister. Most importantly, the search for Dana Edson revealed that Dana was an African-American woman, meaning that the woman posing as Dana was an impostor.

Angie learned this when the envelope that the blonde villainess gave her contained a note that said "Nothing personal," and it was Matt that revealed that she and Dominick were working together. All the while, the evil Dana watched as Angie was arrested for espionage, as Project Marigold was actually a file of vital defense plans, and the episode ended with the villainess driving off with her male accomplice.

The following episode and third season opener, "Catch Me if You Can" (airdate May 29, 2019), saw Angie released from prison after Matt paid a $1 million bond, after which they went on their investigation to capture Dana and Dominick. The pair found out that Dana and Dominick were after a valuable kitana sword that was set to be on display at a museum, and it was Matt and Zoe who spotted Dana as she was entering an elevator, only for the villainess to escape.

Later that evening, after the pair captured Dominick, Matt went to the museum and caught up with Dana, engaging in a verbal confrontation before she screamed loudly and portrayed herself as being accosted by Matt in order to complete her mission. It was at that point that Angie phoned Matt and revealed that the sword was a diversion, and their plan was to pass the drive to the Russian mob, after which Angie had to let Dominick go after he made attempts to convince Angie to escape with a collection of money (later revealed to be $40,000) in his car. The villainous pair made the drop, but later on, detective Kurtis Mazhari stopped and arrested Dominick, after which Matt retrieved the drive.

In the episode's climax, Angie met with Dana as she was on her way out of the country, making a surprise plea to go with Dana after stating that there was no way she would avoid going back to prison. At that moment, Matt arrived and pleaded with his partner to not go through with her plans, while showing Angie the drive and revealing to both her and Dana that Dominick was arrested, Angie suddenly turned heel by pointing a gun at Matt while demanding the drive, after which she shot her partner and took the drive herself and used it to further her pleas to Dana to escape with her. In response, Dana questioned Angie's intelligence and boasted about using Angie to steal the drive for her, adding that she did so to avoid her crimes being connected to her. At that moment, Angie expressed happiness over Dana's statements, and revealed that she and Matt were trapping Dana, as Angie had Dana's confession recorded on her phone, while it was also revealed that Angie's gun had blanks and Matt had a blood pack to further the ruse. Afterwards, Dana was handcuffed and arrested. 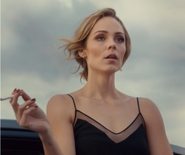 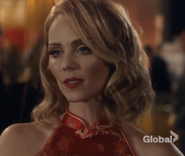 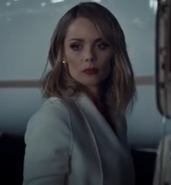 Add a photo to this gallery
Retrieved from "https://femalevillains.fandom.com/wiki/Dana_Edson_(Private_Eyes)?oldid=163759"
Community content is available under CC-BY-SA unless otherwise noted.