Start a Wiki
watch 01:50
The Loop (TV)
Do you like this video?
Dana Bayback (Valerie Cruz) was a villainess from the 2004 film Cellular. She was the sole female among a group of six corrupt LAPD detectives responsible for a wave of murder, targetting drug dealers and killing them for their money and supply.

The group's crimes were inadvertently captured on video by Craig Martin, leading the group to kidnap his wife Jessica as part of a plan to destroy the footage before executing the couple and their young son, Ricky. While her male cohorts held Jessica captive as a ploy to find Craig and the footage, Dana stayed behind at the Martin household. The gang's plan hit a snag when Jessica was able to use a broken phone to call Ryan (the film's main protagonist), informing police sergeant Bob Mooney about her situation.

After tracking down Jessica's address, Mooney arrived at the Martin household and was greeted by Dana at the door, who posed as Jessica and claimed she hadn't called the police to avoid suspicions. After Mooney left, Dana called Ethan Greer (the leader of the band of corrupt cops) and informed him about Mooney's arrival, assuring him she'd taken care of him. After seeing a news report regarding the crimes Ryan had pulled as a means of protecting Jessica and her family, Mooney attempted to call Jessica, only to receive her answering machine. Jessica's voice on the answering machine served to reveal to Mooney that Dana was an imposter, as Dana had spoken with an accent while posing as Jessica while the real Jessicia had none.

Ryan was able to retrieve the camera containing the incriminating footage against the officers after a failed attempt to rescue Craig after he was brought to the bank to retrieve the camera from his safety deposit box. The footage showed the six cops assaulting a pair of drug dealers, with Dana stealing bags containing money and/or drugs and placing them in her car before Ethan shot the pair dead; serving as Dana's reveal as a crooked cop. Meanwhile, Mooney returned to the Martin house and entered after finding the back door broken through, leading the evil Dana to open fire on the detective, pursuing him in an attempt to kill him. While hiding, Mooney was able to distract Dana by knocking over a fish bowl, allowing him to shoot her down. When demanding her identity and where Jessica was, Dana was only able to reveal her status as a cop before dying of her injuries. 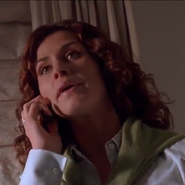 Dana on the phone with Ethan

Dana armed with her pistol

Dana's deceased body
Add a photo to this gallery
Retrieved from "https://femalevillains.fandom.com/wiki/Dana_Bayback_(Cellular)?oldid=152748"
Community content is available under CC-BY-SA unless otherwise noted.