Dana was the girlfriend of Todd Martin, and she experiences the effects of an evil dollhouse on a pair of occasions in the film. The first one came during Dana's tryst with Todd, when a strange fly bites Dana and flies into Todd's ear after he falls. Later in the film, Dana is invited by Todd late one night, but while Todd is making drinks in the kitchen, Dana sees strange markings on her arm while seeing odd visions in the fireplace. At that moment, Dana is suddenly set on fire, with her scalp and the top half of her face burned and horribly disfigured by the time Todd puts out the fire. Dana is taken to the hospital, where she went into a coma and (presumably) passed on due to her injuries.

In the film's climax, Dana began turning heel when she appeared to Todd in his room--with her long blonde hair intact. Wearing only lingerie, the villainess explained that she had to get out of the hospital to get away from all of the sick people, and made a seductive verbal advance at Todd. Dana's true form as an evil zombie was revealed when Todd removed her wig and uncovered her burned face, and at that moment, Dana established her heel persona and attacked Todd.

Following her reveal, the evil Dana snarled at Todd while attempting to kill him. However, Claire (Todd's mother) later appeared and saved Todd by striking the villainess with a bat. 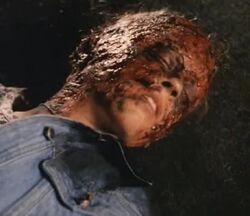 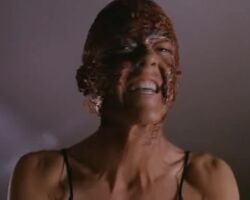 Dana attempting to kill Todd
Add a photo to this gallery
Retrieved from "https://femalevillains.fandom.com/wiki/Dana_(Amityville_Dollhouse)?oldid=150260"
Community content is available under CC-BY-SA unless otherwise noted.