The Female Villains Wiki
Register
Don't have an account?
Sign In
Advertisement
in: 2000s, Brunette, Choker Necklace,
and 8 more

Dame Vaako (The Chronicles Of Riddick)

Dame Vaako (Thandie Newton) is the secondary antagonist in the 2004 sci-fi film The Chronicles of Riddick.  Most of the characters were originally developed in the 2000 sci-fi film Pitch Black.

Dame Vaako is a Necromonger and appears to be based in part on the popular Shakespearean character Lady Macbeth.  She was consumed by, even defined by, overweening ambition.

She is first seen on her husband's arm exiting the Basilica, and is later observed inspecting a room full of potential converts that the Purifier is preaching to.  She ignores the Purifier and examines the converts, perhaps attempting to weed out potential rivals or select new servants,  When Riddick appears and causes a scene, Dame Vaako recognizes that the Necromonger troops are no match for him.  When the decision is made to bring him to the Necropolis, Dame Vaako positions herself on his arm and gives him a tour.

After her husband is sent to follow and destroy Riddick, Lord Marshal Zhytaw tasks her with interrogating Aereon in the hope of finding out what it is the Elementals are up to.  Aereon resists Dame Vaako's threat of defenestration.

When the Necromongers leave Helion Prime, Dame Vaako catches a glimpse of Riddick's intrusion to the Basilica, but did not tell anyone but Vaako.  She thought that his destabilizing presence could lead to opportunity for Vaako to succeed the Lord Marshal.  Although Vaako took the hint and attempted to assassinate Zytaw, all he was able to do was ensure that Riddick struck the killing blow.  Dame Vaako screamed in anguish upon realizing the error. 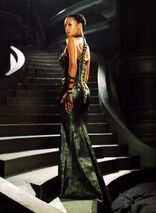 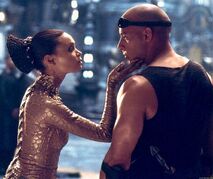 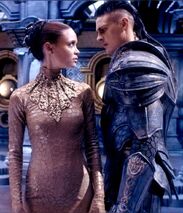 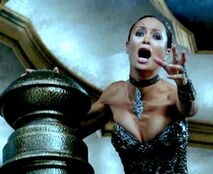